Did Isiah Give His Two Week Notice? 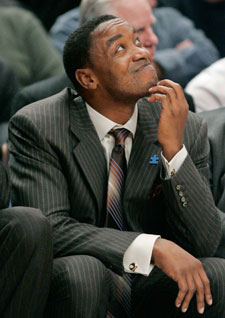 Isiah Thomas thinks he deserves more time. Not that much more, just two weeks, but time to show he can turn this club around. Of course, he has had four years already, but at this point who is counting? Maybe Isiah noticed that the next two weeks contain six games, but only two of those teams currently have winning records. The two-week timeframe came up as Thomas was asked what he would do to a coach with his record as GM. His response: "That's a better question in a couple of weeks. Not today, but in a couple weeks, that would be a fair question. We'll see if we can come out of this. If we can't come out of this, then those are fair questions. There's still a lot of basketball left in the season. There is time to turn it around."

The amazing thing is, despite the circus the Knicks have become fans still pay money to go in person. Tonight’s game is expected to be a sellout (LeBron James is in town) and the fan that got kicked out of Monday’s game for holding up a “Fire Isiah” sign defended himself in the paper today: "I only sit courtside. Don't let them tell you that I don't sit down there. I'm a die-hard Knicks fan, so I only sit in the first five rows. I know what goes on down there. I need Knick games. They're like my drug." Other fans have decided to take their protests to the streets, with a fan protest earlier today at The Garden. Protest organizers designed a 8' x 4' pink slip to urge James Dolan to filre Thomas.

Gothamist would like to point out that since those seats have a face value of $1900 that is a pretty expensive drug, and one you might want to get rehab for fast.

#basketball
#fire
#Fire Isiah
#games
#gothamist
#isiah thomas
#james dolan
#Kathy Willens
#knicks
#Lebron James
#money
#pacers
#protest
#rehab
#sports
#the garden
#Tonight
Do you know the scoop? Comment below or Send us a Tip
A new Gothamist is coming! We’ve moved comments over to our beta site. Click here to join the conversation and get a preview of our new website.