Did De Blasio's Snowplows Snub The UES Or Is The NY Post Deranged?

Bill de Blasio had to deal with a major snowstorm just a few days into his tenure as mayor earlier this month—and by all accounts, he did a fine job handling it, though everyone may have been too distracted by him performing a striptease to fully assess the response. But the second major snowstorm yesterday has proved to be slightly more divisive, at least if you live on the Upper East Side and/or work at the NY Post. The tabloid cried havoc and let slip the dogs of class warfare today, blaming de Blasio for "leaving the 1-percenters in the cold" by not plowing parts of the UES last night—regardless of whether that was actually true or not.

The Post cited the city's snow plow tracker as evidence that no plowing was done between East 59th and 79th Streets and between Second and Fifth Avenues. As you can tell from today's front cover, this little narrative was exactly what they ran with. They also went out and elicited the riled up quotes they needed to sell it:

“He is trying to get us back. He is very divisive and political,” said writer and Life-long Upper East Sider and mom Molly Jong Fast of Mayor de Blasio. 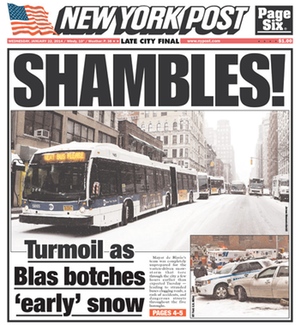 "I can't believe de Blasio could do this. He is putting everyone in danger,” added fellow resident Barbara Tamerin. "I can barely get around and I'm on snow shoes! All of the buses are stuck and can’t go anywhere. He’s crazy. We need Mayor Bloomberg back!" Hell, reading all these quotes, we felt our blood pressure rising as well. Who wouldn't be mad if their streets were specifically not plowed, regardless of income or area?

The only problem with this little narrative? It's not specifically too truthy. Sanitation Commissioner John Doherty—who served under Bloomberg before de Blasio—explained the reason the PlowNYC website showed there had been no snow removal on the UES was due to a faulty GPS system on a salt spreader.

The other problem? Too many cars on the UES: “Traffic also created a big problem for us in that area. I think any of the reporters, or anybody who was in that area this afternoon were reporting, nothing is moving in the area,” Doherty said. "The longer it takes those cars to move, the longer it takes for us to get in there and salt those streets, and that’s what part of the problem was,” he said.

But who can argue with a quote like this: "De Blasio is trying to hurt the more wealthy people by ignoring us but there’s no logic to that,” Martin Cisse told the Post. "There are a lot of blue collar working people out here driving trucks and trying to get around too." Oh sure, the backend of that quote may somewhat contradict their whole thesis that this is revenge on the 1%. And sure, the Post may not have gotten quotes from residents in other parts of the city that weren't plowed immediately either. And hey, whatever delays there were in plowing the UES may very well be totally normal in other parts of the city during previous snowstorms, but there's no denying that de Blasio CLEARLY wanted to stop rich people from leaving their apartments today as political revenge because that makes so much sense.

"I think the city handled it very well," de Blasio told reporters while shoveling his sidewalk in Brooklyn this morning. "There’s always, look, there’s always going to be isolated incidents and there’s always going to be situations where the snow comes up rapidly, as it did for a few hours there, it really sped up and intensified, sadly right before the evening rush hour...But the minute they had the streets clear—in other words there was not traffic in the way—sanitation did a remarkable job."