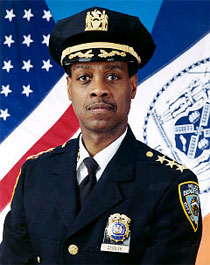 Yesterday, the Daily News reported that one police officer was stripped of his badge and gun "for ordering the NYPD's highest-ranking uniformed black officer out of his auto while the three-star chief was off-duty and parked in Queens." Naturally, the incident has sparked outrage from both sides.

Two plainclothes cops, both white, approached a parked police-issued SUV in Corona and asked the driver to roll down the tinted windows. Chief Douglas Zeigler, who is in charge of the Community Affairs Bureau, told Police Commissioner Kelly the cops had no reason to approach the car. Additionally, one officer apparently "did not believe [Zeigler's] NYPD identification."

The cops claim they saw Zeigler's gun through the window, prompting them to draw their weapons and demand the driver out of the car. Per the Daily News' sources, the cops's story was "Instead of saying he was an armed member of the NYPD, Zeigler shouted, 'Don't you know who I am?'"

The NYPD confirmed that the disciplined officer, Michael Granahan, "dealt with the chief in a discourteous manner, which is unacceptable" and one of the cops tried to open the door after Zeigler identified himself. Granahan's father claims Zeigler showed him his ID only after smacking his son's hand away, saying "Don't you know who I am?" and "ranting and raving." And Granahan's mother telling the News, "Michael's girlfriend is black. We didn't raise our kids to be prejudiced. We're from the Bronx. We have every nationality around us."

State Senator Eric Adams, a former member of the NYPD, wants the NYPD to change its pedestrian stop policies and the incident made the Reverend Al Sharpton say, "You can't make this stuff up! The problem isn't that they didn't recognize him. It is that they don't recognize our rights!" And NYPD Confidential noticed in 2006 that there was an absence of high-ranking black police officers.