Did Anne Hathaway Lure Follieri Back to U.S. for Arrest? 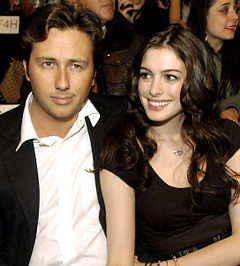 Raffaello Follieri, the alleged con man who’s been charged with 11 counts of fraud and money laundering, has been languishing in a 7½-by-8-foot cell at the Metropolitan Correctional Center for a month since his arrest. To make matters worse, his ex-girlfriend Anne Hathaway refuses to speak with him, and his longtime adviser and attorney Marty Edelman may testify against him. (Not a war-time consigliere.) A friend of Follieri – he still has one, at least – tells the Daily News, “Raffaello is doing very badly. He says people are abusing him. He’s a broken man.”

For her part, Hathaway appears to have shaken that man out of her hair; she was spotted partying with family and friends at a karaoke bar in Cape May Monday night, where she reportedly belted out Journey’s “Don’t Stop Believin’” It would have been a nice gesture to at least dedicate the song to Follieri, but no dice: She’s changed her phone numbers and Follieri has no way of contacting her. The break was so severe that some are wondering whether Hathaway cooperated with investigators in luring Follieri back to the U.S. from Europe so that he could be arrested:

“He was in Europe, working on a deal,” says a source. “He didn’t have to come back to New York. He knew he was being investigated. But she kept calling him, saying they needed to resolve their future. A few days after his return, he was arrested.”

Some clue into Hathaway’s motives may be revealed from her diaries, which were just seized by the FBI. (Apparently she left them behind in Follieri’s Trump Tower pad!) The feds also took photos of Follieri with the Clintons, the McCains, Pope John Paul II, as well as watches, a Tiffany clock, an antique Bible and personal photos of Follieri and Hathaway, in happier times.