Did A Federal Agency Break The Law By Deleting Tweets Critical Of Trump?

Rogue employees at the National Park Service are in the sixth day of a campaign of tweets about facts—the attendance at the presidential inauguration, the existence of climate change, the injustice of Japanese-American internment—a show of resistance, however symbolic, to the reality-subverting agenda of Cheerless Leader. NPR tells us that the kind of media blackout in effect at the Department of the Interior, Environmental Protection Agency, Department of Agriculture, and Department of Health and Hospital Services is a normal part of any presidential transition, so that's reassuring. Meanwhile, Trump press secretary Sean Spicer said the reason for the Park Service's deleted tweets and the planned scrubbing of the EPA website's climate change pages is because they are "inappropriate" according to internal standards.

We regret the mistaken RTs from our account yesterday and look forward to continuing to share the beauty and history of our parks with you pic.twitter.com/mctNNvlrmv

Guess who screencapped the glorious @BadlandsNPS Revolt of 2017 right before the tweets were deleted. #moi #Badlands #climatechange pic.twitter.com/k7GshtGpDs

Explanations aside, the Park Service rebellion and subsequent censorship raised the question: Are tweets protected under the Federal Records Act, the same federal law that some accused Hillary Clinton of violating with her secret private email server? And if so, is deleting a tweet a civil offense, or even a crime?

#DYK deforestation & degradation account for up to 12% of global carbon emissions? #climate

We reached out to experts on government transparency to talk about this issue, and more generally what they think Trump's administration means for the availability of public records.

"My short answer is yes, tweets are records. The Federal Records Act is pretty clear," said Nate Jones, director of the FOIA Project at George Washington University's National Security Archive. "But the longer part of that is that records are destroyed all the time [that are protected] under the Federal Records Act—Hillary Clinton is a good example—and no one has ever, that I know of, been prosecuted or punished [under the law]. But technically speaking, yes, deleting a tweet is probably breaking the law."

The FRA isn't a criminal statute, and doesn't provide for specific ways to punish individuals, but there is a separate federal law that makes the willful destruction or concealment of government documents a felony.

Jason R. Baron, a lawyer at the firm Drinker Biddle and former litigation director at the National Archives and Records Administration [NARA], sees the situation with the rogue tweeters as less cut-and-dried.

"NARA leaves it to agencies, such as the National Park Service, to identify what types of social media communications constitute federal records," he explained in an email. "In general, if a tweet from an agency employee pertains to federal policies, or is about the mission or business of the agency, then the tweet would normally be considered a record, provided that the information conveyed in the tweet is only being made available on the social media site."

He continued, "How long a tweet should stay up online is also a matter of agency policy, as many types of record communications can be considered ephemeral or transitory in nature. Finally, an agency is always authorized to amend, supplement, or delete records of any kind (including tweets) if they do not accurately convey the agency’s official position."

Jones argues that NARA archives its social media, and should be seen as the gold standard of how to handle records. "Anything they do, it’s a pretty good bet that other agencies should do it too," he said.

A set of 2015 NARA training materials on social media archiving, obtained by Gothamist, is titled, "Social Media Capture - Everyone’s Nightmare." A 2014 bulletin by the agency lists the following questions for agencies looking to gauge whether something should be preserved as a record:

Does it contain evidence of an agency's policies, business, or mission? Is the information only available on the social media site? Does the agency use the tool to convey official agency information? Is there a business need for the information? 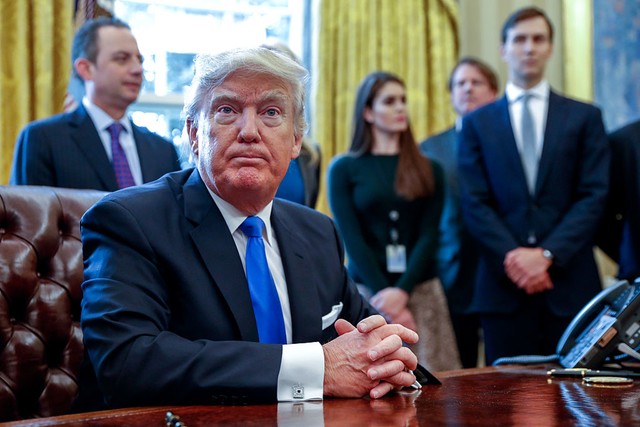 President Trump's apparent Twitter addiction raises its own quandaries. Presidential communications are supposed to be preserved under the Presidential Records Act, but Trump and/or his team often delete tweets because of misspellings such as "honered." Trump is also complicating things by holding on to his personal Twitter account while president rather than transferring the whole operation over to the handle @POTUS.

Baron said it will be up to White House lawyers to establish how best to fulfill the legal requirements for preservation (Obama's @POTUS account was set up to auto-archive).

Trump's Twitter direct messages will also likely have to be preserved, although, Baron said, if they are deemed to be personal records they will be exempt from disclosure, and if they are determined to be presidential records, the other option, they will be exempt from Freedom Of Information Act request for the length of Trump's presidency plus five years.

Another area for White House watchers to scrutinize will be the private Republican National Committee server where Newsweek reports that top White House staffers including Kellyanne Conway, Jared Kushner, Sean Spicer, and Steve Bannon have email accounts. This is not inherently improper, but it would be if they use the accounts to conduct official business, as opposed to political business, and if they tried to hide such emails from disclosure and preservation.

The Obama administration had a mixed record on transparency, denying a record number of FOIA requests and prosecuting a record number of whistleblowers under the Espionage Act, while also publishing a substantial amount of data online. Jones predicted that the Trump administration will be inaccessible to the public, but said that there are other ways of getting information

Jones explained, for example, that the tenure of the director of the Justice Department's Office of Information Policy spans the George W. Bush and Obama administrations. "These are supposed to be career civil servants," he said of the federal government's stewards of information, noting that when George W. Bush's Justice Department politicized hiring by rejecting applicants perceived to be liberal, several investigations ensued. Interim director of the DOJ's Civil Rights Division Bradley Schlozman resigned amid the controversy. Also, FOIA, however flawed, is a law, and people will still be able to take it to court when they feel the government isn't meeting its requirements.

The National Park Service didn't respond to an email seeking comment, and a NARA spokeswoman said her office was working on a statement about agencies deleting tweets, but we had not received it at press time.

ICYMI: 2016 was the 3rd year in a row to break the global temp record. How did this happen and how unusual is it? https://t.co/Js5E4C0JsY pic.twitter.com/KR3mrnc7ac

Scientists in particular are afraid that Trump will order the deletion, alteration, or concealment of climate data, a rational concern given that the new president is an enemy of evidence-based truth in general, and of the scientific consensus around human-caused climate change in particular. Hackers and scientists are scrambling to back up publicly available government data before Trump's minions can destroy it. Trump has reportedly backed off an early command for the EPA to take down the sections of its website on climate change for the time being, but Trump EPA spokesman Doug Ericksen reassured nobody when he said the administration is reviewing "editorial" parts of the website and "looking at scrubbing it up a bit."

Ericksen told NPR on Wednesday that Trump lackeys would be reviewing scientific research "on a case-by-case basis" before publication, which would violate the EPA's scientific integrity policy. Ericksen told the Associated Press later in the day that he was actually referring to the review of existing information on the EPA website.

Baron said that whether the deletion of data violates records rules depends on the specific data in question, who's doing the deleting, why, and whether there are copies elsewhere. For information on agency websites, he said, "The threshold question is, does the agency consider a body of materials appearing on a website to be records? Agencies have discretion to consider that much of what appears on their websites is not record material at all, because the information simply represents the online publication of content that appears or is being preserved in another place—that is, the official copy is somewhere else."

In other words, Trump and his enablers have some leeway when it comes to defunding research he doesn't like, remixing the climate change page on the EPA website or creating an Immigrant Crime vertical on whitehouse.gov.

2016 was the hottest year on record for the 3rd year in a row. Check out this @NASA & @NOAA report: https://t.co/rLJUC56xqi pic.twitter.com/AKhFzYw6l6

N.B.: A suggestion on tactics for the Park Service Tweet Resistance: After the Irish Republican Army's first prison hunger strike in 1980, Bobby Sands and his comrades realized that they could maximize publicity by having prisoners join at staggered intervals, rather than all going on hunger strike at once. The risks of what these federal employees are doing are obviously nowhere near that faced by Irish republicans during the Troubles, but the lesson is clear: instead of creating a cacophony of national parks criticizing the president all oat once, space it out, so that the words of each account ring loud and clear, and it's an event when a new one joins in from one day to the next. Today, Badlands! Tomorrow, Golden Gate! The next, victory?

If you'd like to leak to us, you can reach us at tips@gothamist.com, or you can send me an encrypted email at nathan@gothamist.com. My PGP key is here.