Several of the tenants at rent-stabilized 711 West End Avenue on the Upper West Side are skeptical of plans, recently approved by the Department of Buildings, to construct a 10-story luxury condominium on top of their 6-story, circa-1952 brick apartment building.

Because the existing building's 144 apartments are stabilized, Kaled Management, which first filed plans for the vertical luxury addition dreamed up by developer P2B Ventures last December, doesn't have the legal right to evict tenants from the building for a ground-up renovation. Their solution, which the NYTimes described today as "daring," involves digging trenches for 18 multi-ton pilings around the existing structure. These pilings will support a steel and concrete platform, which will hover six feet above the roof of the existing building, and will be topped with 10 additional stories of condos. According to the paper, "the facade of the Art Deco-inspired addition will obscure the gap" between the old structure, and the new.

"An antique pitcher sitting on my table fell and shattered with the vibrations of a truck idling outside my window," Stephanie Cooper, an attorney and 47-year-resident of 711 West End Avenue, told us earlier this month. "You can always hear the dishes rattle in my cupboards. Personally, I think that's very peculiar in the context of what they are going to do—swing multi-ton pilings into place that will sit inches away from our brick walls."

Cooper is a co-chair of the building's tenant group, which recently hired its own engineer, Rich Herschlag, to assess Kaled's safety plan and blueprints. A report issued by the engineer questions the safety of the developer's proposal to expand the building's existing garage, as well as the strength and stability of the pilings that will support the new condo. According to the report, the developer's plan "does not include a well thought out proposal for vibration monitoring."

Soon after Kaled's plans were released this winter, tenants, with the support of City Councilmember Helen Rosenthal, started campaigning for the extension of the West End Avenue historic district, in the hopes that an adequate extension of the district would curtail the 10-floor addition. The group became suspicious on June 22nd, when the DOB officially issued Kaled's construction permits—one day before the avenue was landmarked.

"The developers knew the [LPC] vote was coming so they slammed through a bunch of permits to avoid being accountable," a parent at nearby P.S. 75 told DNAInfo in June. Parents at the nearby elementary school are worried about the noise and dangerous equipment that construction would bring to the neighborhood. 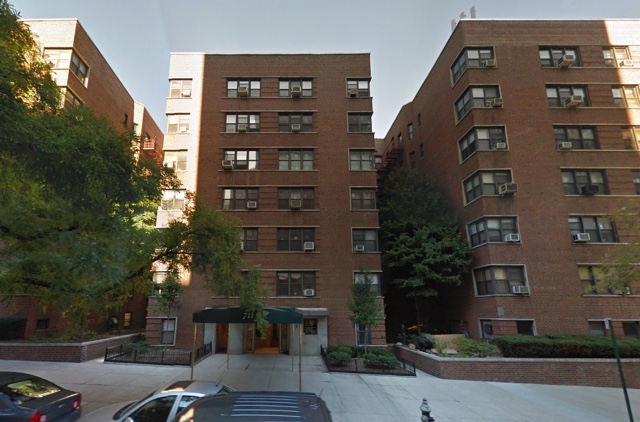 According to the NYTimes, the DOB approved 711's condo addition only after a special review by its high-rise investigation team. "It's our mission to facilitate safe development,” DOB Deputy Commissioner Thomas Fariello told the paper. “Notice that safety comes before development."

In late January, West Side Rag reported on a new website, 711westend.com, seemingly written by tenants of 711 West End Avenue and equipped with building plans and a tenants' rights section. According to the site, while 711 will get an "elegant new entrance and new lobby replacing the existing one," it will not have a "so-called 'poor-door,'" or separate entrance for stabilized tenants. According to Cooper, the website, which has not been updated since January, was created by friends of the Miller Family, which took over ownership of the building in the 1960s, and still has a stake in it. According to the NYTimes, several Millers currently live in the building.

Meanwhile, a new elevator that will only serve the condo is displacing a vertical column of tenants on the north side of the building, many of whom have reportedly taken buyouts—either to move elsewhere in the building, or to different buildings entirely. Only one tenant has refused, and is fighting eviction with an attorney.

"The tenant was on the verge of moving to another apartment in the building, when she found out it was because of the elevator, and she decided she didn't want to be bullied," Cooper said. Reached by phone, a spokeswoman for Kaled would not comment on the proposed elevator.

"You're putting on top of an existing building, a building that's larger than what's already there," said Sam Himmelstein, an attorney representing the tenants. "Needless to say, this is just the beginning. We don't believe this is a project that should go forward."

Reached by phone, a spokeswoman for Kaled Management said, "At this point we cannot confirm anything, and that's all we can tell you."

#711 West End Avenue
#luxury condo
#Upper West Side
Do you know the scoop? Comment below or Send us a Tip