Mayor de Blasio is threatening to reconsider Slate Property Group’s proposal for a large-scale mixed-use development at the 112-year-old Bedford Union Armory in Crown Heights, citing Slate's involvement in the shady deal that cost the Lower East Side one of its last remaining healthcare facilities. The New York State Economic Development Corporation awarded Slate and BFC Partners development rights to the Brooklyn project last year. But on Wednesday, de Blasio said that Slate's involvement in the Rivington Deal—a snafu for which investigators say City Hall is also to blame—has given him pause.

"We're going to take a very hard look at that situation," de Blasio told reporters at a press conference. "That contract has not been finalized."

The project is slotted to include a mix of market-rate and affordable apartments, as well as offices, community space, and a rec center featuring basketball courts, a swimming pool and an indoor turf field. (Knicks forward Carmelo Anthony is providing input on the rec center.)

De Blasio criticized Slate’s handling of the Rivington House Deal. “I think what they did was inappropriate,” he said. "The DOI report makes it quite clear. And I think anyone who seeks to do business with the City of New York and misleads us needs to know that there will be consequences. So we'll take a hard look at that situation."

A Department of Investigation probe into the $16.15 million deed lift that cleared the way for Rivington House to be converted into luxury condos found City Hall culpable, as well as Slate. According to the DOI's report, Slate urged its employees to keep quiet about the impending deal with Allure Group, the for-profit healthcare provider that owned Rivington House, explaining that, “If the City found out about the sale, the deed restriction might not be removed." In other words, Slate allegedly sought to dupe the city, for profit.

But the City's "complete lack of accountability" regarding deed alterations and removals, as well as "significant communication failures" between City agencies, also factored into the deed being lifted, the DOI found. 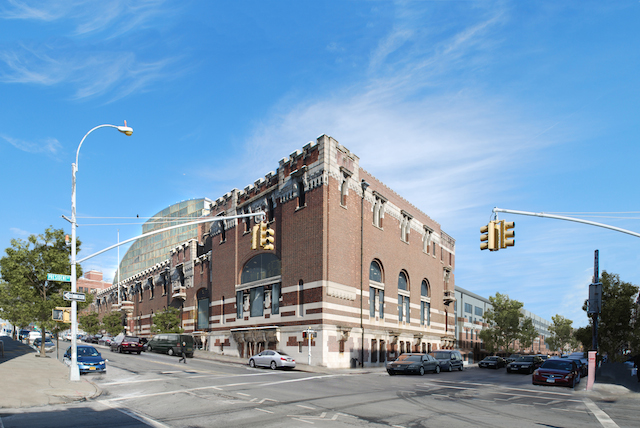 The affordable housing nonprofit New York Communities For Change recently released a report on Slate, calling the EDC's willingness to award it the Bedford Union Armory contract "sordid." In addition to the Rivington flip, Slate, which has numerous luxury residential properties around New York, won rezoning rights at 176 Woodward Avenue in Ridgewood, Queens, on the condition that it would make half of the new apartments affordable. Slate then sold that property to a new owner, who's under no obligation to build 50 percent affordable.

But while NYCC is pleased to see the mayor putting some pressure on Slate, spokeswoman Renata Pumarol said Thursday that her group is primarily concerned about the lack of truly affordable housing planned for the Bedford Union Armory site. According to the EDC, the project will include 18 units, out of a total 330, for renters who make 37 percent of the Area Median Income, or $31,931 for a family of four. For context, a third of NYC households have an annual income of less than $35,000.

Deputy Mayor Alicia Glen told reporters earlier this month that the high cost of private land has made it necessary to work with private developers in order to build affordable housing. "Land and construction costs [are high]," she said. "We don't have a gazillion city-owned buildings to put into the sausage maker. We have to be much more creative and work with the private sector."

The Bedford Union Armory is one of those rare City-owned properties, and advocates are troubled that the EDC is still considering private developers for its development. "Our demand is... that they give the Bedford Armory to a not-for-profit developer, and that they do the same with any public land that they're looking to develop," Pumarol said. "If we keep working with these for-profit developers, we're going to keep getting terrible affordability levels."

Slate did not respond to a request for comment. But following a protest at the Bedford Union Armory on Wednesday, Slate co-founder David Schwartz told DNAInfo that the project will create "much-needed recreational facilities, affordable housing and affordable office space for the Crown Heights community." As for the NYCC report, he said, “These attacks are meritless and do not serve the interests of local residents."

EDC referred comment to City Hall, where Mayoral spokesman Austin Finan stated that, "we are taking a hard look at the situation.” Before developers are confirmed for the project and affordability levels are set in stone, the Bedford Union Armory proposal still has to go through a lengthy public review process.

#affordable housing
#bedford union armory
#City hall
#mayor de blasio
#NYCEDC
#Rivington House
#slate group
Do you know the scoop? Comment below or Send us a Tip
A new Gothamist is coming! We’ve moved comments over to our beta site. Click here to join the conversation and get a preview of our new website.