Sunshine Cinema has vanished from most New Yorkers’ minds. In 2017, the theater's fate seemed sealed after it was shuttered and turned into yet another boarded-up development site.

Now, the beloved Lower East Side haunt for indie and foreign film lovers could be razed very soon to make way for an office building. Developers East End Capital and K Property Group have obtained a $67 million construction loan as well as an additional $19 million in financing, according to Crain’s.

The theater was supposed to have been demolished last spring. Tears were shed and tributes were written. But real estate financing is a fickle market and the historic building has managed to stave off the wrecking ball.

The developers, who did not immediately respond to a request for comment, bought the property in 2017 for $31.5 million.

In a 2018 interview with the Commercial Observer, Gregory Kraut, a managing partner at K Property Group, was asked whether he felt bad about demolishing the theater. He responded, “No, not at all. First of all they were trying for years to make money and they couldn’t. The area has changed, and quite frankly, the business model didn’t, and so we gave them options to renew. They had several opportunities to buy the building.” 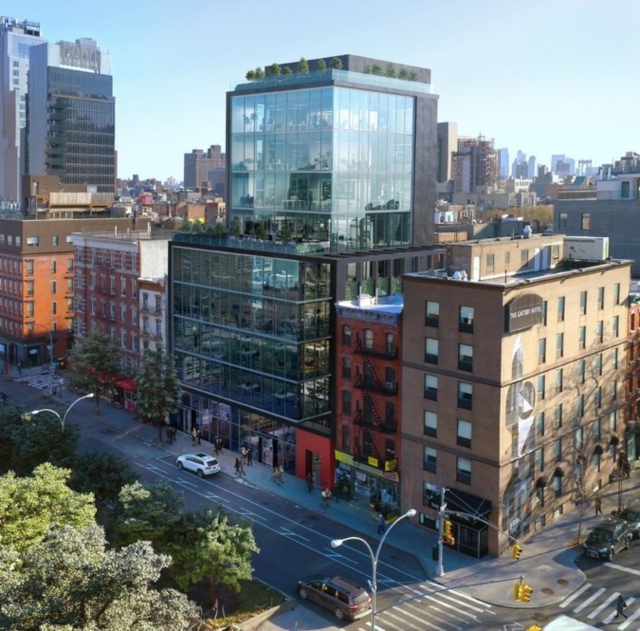 Rendering of the office building that will replace Sunshine Cinema.

Boutique office buildings have been a burgeoning trend in Lower Manhattan. In the East Village, recent calls to expand plans for an office project on St. Mark's Place drew sharp opposition from community members who saw the corner site as important gateway into one of the city's famed cultural strips.

"We’re seeing throughout Lower Manhattan this proliferation of office development in neighborhoods that have never seen it before," Andrew Berman, the executive director of the Greenwich Village Society for Preservation told Gothamist on Thursday. "It has the potential to substantially change their character."

Standing on Houston Street for over a century, the building has in fact survived many of the city's economic and cultural changes. It began as a church, then became an athletic club, and later was turned into a movie theatre and venue for Jewish vaudeville acts. Sunshine Cinema’s demise, which came on the heels of the closing of Lincoln Plaza Cinema, prompted worries about the future of art house theaters in the city.

Shortly after Sunshine’s last screening, a street artist known as Faust spray painted a black and white mural with the single word “sunset” on the building’s facade. In an essay published on The Lo-Down, he wrote:

“It’s engrained in us all as New Yorkers to gripe every time a local landmark shutters, be it a cultural institution in a historic building or a corner bodega that can no longer compete with the new Whole Foods that opened down the block. It’s part of our DNA to wax poetic about the New York City we grew up in, whichever era that was. But it’s safe to say that more prescient than the idea that New York is dead is another old adage, the only constant is change.”