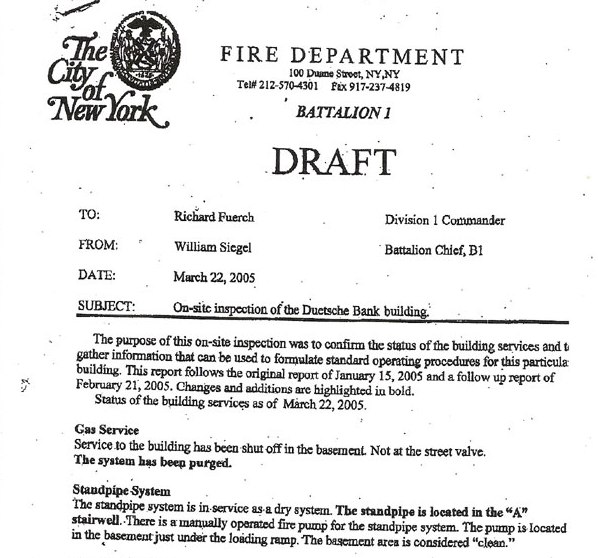 Wow - the NY Post got a hold of a FDNY battalion chief's 2005 memo that clearly outlines a plan for fighting fires at the Deutsche Bank building. The FDNY had admitted last week that it did not have a pre-fire plan before the August 18 fire that required over 200 firefighters and took the lives of two.

The Post has two pages of Battalion Chief William Siegel's memo (page 1, 2), which included suggestions for fighting a fire and suggested regular inspections of the building. The FDNY is supposed to inspect buildings under demolition every 15 days, but at the Deutsche Bank, the FDNY suspended its inspections "because of concerns about contaminates in the building." Siegel, though, recommended that inspector wear self-contained breathing apparatus in order to keep up the checks. 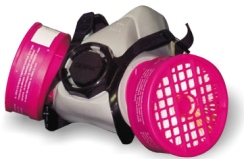 And some more information about the possibly sketchy practices of contractor Bovis, who is in the hot seat over illegal work conditions that subcontractor John Galt Corp. used (cigarette smoking and alcohol consumption on site; use of flammable materials). A woman tells the Daily News the she quit her job removing asbestos from the building because her boss didn't want her wearing an asbestos mask. Seriously: Helen Rocos questioned how safe the roof, which had WTC debris (including remains), was and wore a mask. She said her boss yelled, "Helen! Take that mask off your face! You are spooking everybody, spooking the people from the medical examiner's office!"