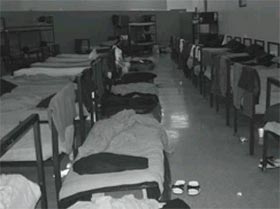 As more and more people are held in Immigration and Customs Enforcement custody as authorities decide whether to deport them, the issue of detainee treatment is becoming a bigger issue as some are dying during their waits. Today, the NY Times has the harrowing details of one man's death while in custody for over a year--it turned out he had cancer and his lawyers and family contend officials refused to believe he was sick.

According to the Times, Hiu Lui Ng had arrived in NYC back in 1992 as a 17-year-old and by 2007, he "was a New Yorker: a computer engineer with a job in the Empire State Building, a house in Queens, a wife who is a United States citizen and two American-born sons." After an immigration court notice was "mistakenly sent to a nonexistent address" in 2001, his wife's attempts to get him a green card, and "bad legal advice," by the time Ng went for a green card interview in July of last year, ICE agents arrested him.

As his family tried to get him out, Ng was shuttled between a number of facilities (contracted by the government to hold detainees) and he began to fall ill in April 2008. Here's just a portion of the NY Times' description of his conditions and treatment:

Soon, according to court papers, he had to rely on other detainees to help him reach the toilet, bring him food and call his family; he no longer received painkillers, because he could not stand in line to collect them. On July 26, Andy Wong, a lawyer associated with [Theodore] Cox, came to see the detainee, but had to leave without talking to him, he said, because Mr. Ng was too weak to walk to the visiting area, and a wheelchair was denied.

On July 30, according to an affidavit by Mr. Wong, he was contacted by Larry Smith, a deportation officer in Hartford, who told him on a speakerphone, with Mr. Ng present, that he wanted to resolve the case, either by deporting Mr. Ng, or “releasing him to the streets.” Officer Smith said that no exam by an outside doctor would be allowed, and that Mr. Ng would not be given a wheelchair.

Mr. Ng told his lawyer he was ready to give up, the affidavit said, “because he could no longer withstand the suffering inside the facility,” but Officer Smith insisted that Mr. Ng would first have to withdraw all his appeals.

Ng's lawyer took the matter to court, and, because the federal judge insisted on July 31, Ng was allowed to go to a hospital on August 1: "The results were grim: cancer in his liver, lungs and bones, and a fractured spine." Ng died on August 5.

Ng's lawyers have asked for a criminal investigation in his death.. The Times details other in-custody deaths.