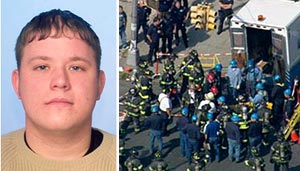 Yesterday, a routine Con Ed visit to a manhole at Euclid and Sutter Avenues in Brooklyn turned deadly when an explosion occurred with one worker trapped inside. George Dillman, 26, was killed as he was splicing cables.

A witness, Craig Fullmore, told the NY Times that black smoke "started pouring out of the manhole and a buzzing could be heard." Dillman's partner, Craig Penney, was above ground and tried to help Dillman by lowering a ladder, but a witness told the Daily News, "The guy down there - he didn't have a chance. He would have needed God to pull him out."

Fullmore was pulling an emotional Penney away from the manhole when the explosion occurred. A neighbor said, "You could feel a rumbling in the floor, like a mini-earthquake. The flames were eight feet high, and the smoke covered the whole block. " It took two hours to recover Dillman's body, because, the NY Post reports, firefighters and Con Ed workers "struggled to turn off the electrical current to a dozen feeders--each carrying up to 27,000 volts."

The cause of the explosion is still being investigated. A spokesman for Utility Workers Union of America Local 1-2 told the Times, “People don’t realize, but there are a lot of people who get burned on the job. You throw a switch and the light comes on. But it takes a whole lot to make sure that happens and people take that for granted.”