Look, no one is happy about Fort Tilden closing after that violent strumpet Sandy came in and flung rebar all over the shore, upsetting thousands of sunbathers who can't afford a private seaplane to the Hamptons but also don't want to contract gonorrhea from the sands of Coney Island. After an outcry, the National Parks Service, which operates the Gateway National Recreation Area, is allowing volunteers to come help clean up the Fort Tilden beach, but it seems it isn't an easy fix.

Undeterred, volunteers with "Clean Up Fort Tilden" are heading out on Sunday to attempt to get the crud-covered beach back in fighting form before the weather really heats up (with free transportation from Rockabus). Time's Up is also hosting a ride out to the battered shore on Sunday at 9:15 a.m. from Grand Army Plaza, and clean-up will be held from 11 a.m. until 3 p.m. Organizers recommend that you bring your own boots, gloves and lunch. 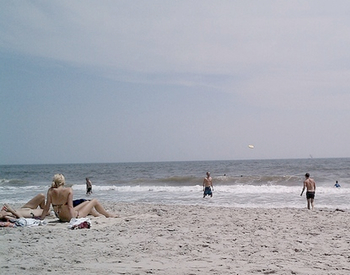 Organizer Manjari Doxey tells us that so far 36 people have registered to help on Sunday, but still there's room on the bus for more. (RSVP via email—there will be another clean-up expedition in June at a date TBD, and in the meantime, anyone interested in making a donation to the effort is encouraged to email for PayPal.) This weekend the group will focus on debris removal, sand transportation, and building of snow fencing to capture sand for the beach naturally, since it will not be receiving any sand.

"When I had initially approached [Gateway], they hadn't planned a cleanup effort or anything for Tilden," Doxey explains in an email. "They are very wrapped up in other volunteer projects with other spaces they manage (they were pretty ravished overall) so they were happy to receive some help. It was difficult at first because no one knew the long term plan for Tilden such as if was going to be receiving sand etc. We still don't know the long term plan but an initial cleanup will expedite everything."

But before you start thinking that any of this is going to get the beach open this summer, we've got to put the kibosh on your dreams (as we strive to, everyday). Daphne Yun, a spokesperson for Gateway National Recreation Area, tells us that though Saturday's clean-up was indeed "very successful," that doesn't mean the sand will be sufficiently pristine to, you know, actually lay upon.

"At this point we still think we won't be able to open this year," she said in one swift, hope-crushing blow. "People have volunteered— we're not going to say 'no,'" she said, adding that unfortunately, much of the damage, like exposed bulkheads and giant pieces of rebar, will require more than just a few helping hands to fix.

At least there's always next year. "The things that won't open this summer will definitely be open next summer," Yun said.

#fort tilden
#hurricane sandy
#original
Do you know the scoop? Comment below or Send us a Tip