Despite Being Rickrolled, Mets Not Likely to Play Astley 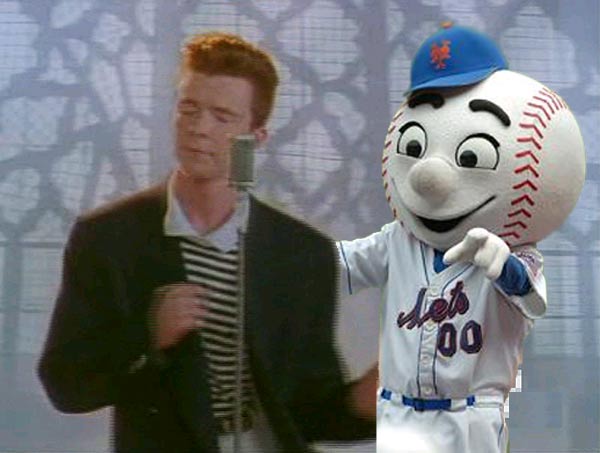 Lost in the shuffle of the Mets' loss Tuesday to the Phillies in the home opener was the beginning of the team's runoff for official Sing-A-Long song. Last season the Mets used "Sweet Caroline," which is a good song and all...but it's already being used by the Red Sox. Realizing that rubbed some people the wrong way, the Mets included the Neil Diamond classic in this year's online balloting but provided several lame other choices. Thanks to the wonders of the Internet, Rick Astley's 'Never Gonna Give You Up' won. Sensing mischief afoot, the Mets said they would play five other songs and see how the Mets fans react.

Mets spokesman Jay Horwitz told us the Mets, "will determine the winner by the applause and crowd reaction when the songs are played." Judging fan reaction Tuesday -- fans booed heavily when the Astley hit was played -- the Shea faithful won't be hearing "Never Gonna Give you Up" again. Unless they really don't like "Movin' Out." This could also be the last time the Mets allow for write-ins. More than five million people -- some of them Phillies fans, no doubt -- tried to Rickroll the Mets

#baseball
#mets
#rick astley
#rickroll
#shea stadium
#sports
Do you know the scoop? Comment below or Send us a Tip