A Bronx woman was arrested for soliciting donations while posing as the aunt of a six-year-old Newtown shooting victim. Nouel Alba, 37, allegedly used Facebook to perpetrate the fraud—along with text messages and phone calls with donors.

She had been mentioned on Anderson Cooper's CNN show and then on the Today show in segments about scammers preying upon victims and sympathizers. The Today Show noted how Alba posted her bank account number and Paypal info on Facebook page she operated (called Victorian Glam Fairys), asking for help to pay for Noah Pozner's funeral, "We've set up a funeral fund for my brother.... Anyone willing to make a donation can make one...." But when reporter Jeff Rossen went to Alba's home, she claimed, "No, I never sent any message on Facebook."

[Rossen asked,] "Then why is your account number on it, your bank routing number, your email, and your PayPal information?"

"Because I sell things online," Nouel told us.

"Because you sell things online? But then why were you posing to be a member of the Pozner family? They say they've never met you before." 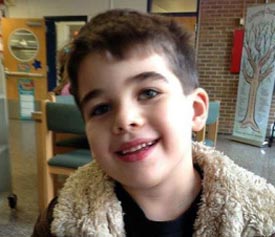 Nouel also said that the information was posted by someone else, though she received the money (she refunded it). However, Alba, according to the FBI, texted with one victim who asked how she was doing, "Ima mess. Not looking forward to see that casket cause that is what will kill us all today. 11 gun shot in his little body or take those bullets. The guilt we have just keeps building up."

When federal agents questioned her two days after the CNN report, she told them that she never solicited donations on the Victorian Glam Fairys Facebook page. Alba suggested that "two individuals with whom she had prior negative experiences on Facebook had accessed her account and posted information claiming that [she] was related to one of the victims." She also said that she hadn't accessed her PayPal account in ages, but the FBI found that she had accessed it right before posting the donation solicitation by checking IP addresses.

Alba was charged with lying to federal agents (you can read the criminal complaint here-PDF) and released on $50,000 bond. FBI agent Kimberly Mertz said, "It is unconscionable to think that the families of the victims in Newtown, and a sympathetic community looking to provide them some sort of financial support and comfort, have become the targets of criminals. Today’s arrest is a stern message that the F.B.I. will investigate and bring to justice those who perpetrate Internet fund-raising scams, especially those scams that exploit the most vulnerable in their time of shared sorrow."

Pozner's uncle told the Today Show that Alba was not related to little Noah, "It's trying to turn a profit on a horrible tragedy, on the death of kids, 6-year-old kids, 7-year-old kids. And to me, that's just a horrible thing to be doing."

#bronx
#newtown shooting
#noah pozner
#nouel alba
#sandy hook elementary school
Do you know the scoop? Comment below or Send us a Tip