At 10:05 a.m. this morning, at least 120 people had lined up down Hester Street in the powerless Lower East Side to wait to plug their phones into a generator provided by CAAAV. By 10:30, roughly 10 of them had been served. Volunteers distributing non-perishable food and flashlights on the sidewalk ran out in 10 minutes. One woman shouted that she had been "shoved down" by the crowd as she tried to get a flashlight that was promised to her yesterday, while another man yelled at a volunteer in Mandarin, his hand holding a cellphone charger as it jabbed the air in front of him. "We understand that many parts of New York and the whole Northeast are suffering right now," volunteer Esther Wang said. "But people on the Lower East Side don't have water, electricity, or food. They're frustrated."

Wang said that the crowd in front of the community organization was so great yesterday that at least 10 police officers showed up. "They told us we had to shut down because it was a public safety hazard, and that a riot was going to start, and they were worried that people were going to have their iPhones stolen," Wang said incredulously. "We were able to negotiate with them, but we found out that there's a sign outside their precinct that directs people here for help."

Catherine Perry, who was at the line's midway point at around 9:40 a.m., lives on South Street and said she had enough provisions to last her until Saturday. "But our building reeks of garbage. The compactors don't work. The maintenance man told me that the garbage in the compactor is piled up to the 18th floor." Perry also described what using the toilet was like without running water: "You gotta put the bag under the toilet, do your business, then throw it in the incinerator."

Though her apartment is dark, Perry says some of the hallways are lit with generator power, and residents had attempted to rig TVs and radios up to the source. "My father's 74, and he was at Beekman [Hospital] before they evacuated him up to Lenox Hill. He wants to come home but I tell him, 'Dad, we don't have power.' " 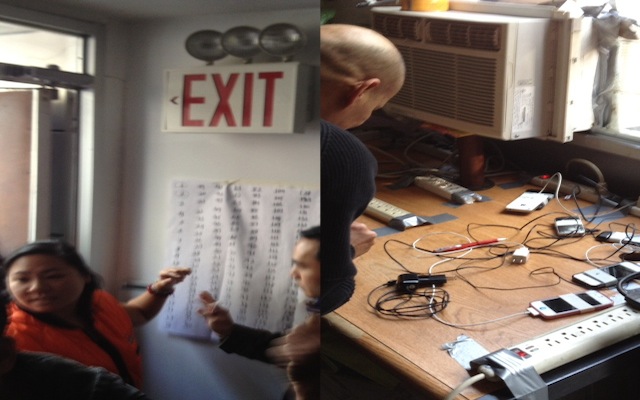 CAAAV can charge 30 phones at a time. Volunteers affix a number to a phone with masking tape that corresponds with the owner's position in line (Gothamist)

Before CAAAV opened its doors, Wang paced the line, answering questions. When was the subway going to work? How long would power really be out? Were the buses actually running into Brooklyn? "A lot of people are getting no information unless they're able to get out of the neighborhood," Wang explained. "And many of them aren't."

Christopher Castro, who lives with his girlfriend and her sister on Cherry Street, said he hadn't seen any police or public officials around his building. "Nobody really knows anything," he said. "I've been calling people to see what's going on, but no one knows anything for sure. And now our phones are pretty much dead."

A worker from Two Bridges Neighborhood Council approached Wang and confirmed that she'd send volunteers to their headquarters at 80 Rutgers Street. "We have about 70 seniors who did not evacuate, who have no place to go, who are now homebound," Wilson Soo said. "We have volunteers walk them up hot meals 10 flights."

Wang says that none of CAAAV's supplies have come from the city, though she has emailed state and local representatives for help. "I know all the public officials are very busy right now, and I'm sure they can marshal the resources, I'm just not sure the resources are there." She adds, "It just doesn't seem like there's a coordinated response to help everybody."

If you'd like to help CAAAV or Two Bridges, they are accepting monetary donations at their respective locations at 46 Hester Street and 80 Rutgers Slip, and CAAAV is also accepting donations of flashlights, batteries, nonperishable food items, and water.

#caaav
#cellphones
#Chinatown
#hurricane sandy
#Lower East Side
#powerless zones
#Two Bridges
#original
Do you know the scoop? Comment below or Send us a Tip