Desnudas In The DAZ: Times Square Is 'Even More Hostile Than Last Year'

Angel Bunting, 33, stood inside a teal-colored 'Designated Activity Zone' on the corner of Broadway and 45th Street on Thursday afternoon, bare chest painted red, white and blue, talking to a reporter about the NYPD. For two weeks now, beat cops have enforced the eight 10' x 50' painted boxes where Bunting and her fellow desnudas, as well as costumed characters, dance teams, CD hawkers and mimes, are now confined to solicit tips. "They're being pretty lenient at first," she said.

As Bunting spoke, a middle-aged woman stepped up from behind, technically outside the zone, and crouched beside the desnuda's thonged butt. "Excuse me!" Bunting said, realizing that the tourist was snapping a free picture. "Excuse me! Excuse me! Rude!"

"You can't do that sweetheart," said Bunting's friend and fellow-desnuda Amanda Roman, 24, as the tourist stepped sheepishly away.

It's more difficult for the desnudas to shun freeloaders now that they're confined to the Times Square Alliance's zones, the women said. "If you're taking pictures of me [from outside the zone], if you're taking video of me, I can't be like, 'Hi can I get a tip for what you're doing?'" Bunting explained. "Like, I do anyway obviously... but if the cops see me they're like, 'No, no, no you can't do that.'"

Before the zones, if one of the women caught someone photographing them from across the plaza, they could try to negotiate. "If I'm not in a box and I see someone taking a picture over there," Bunting explained, pointing, "I can walk over and say, 'Well, just take a selfie with me.' Now I have to be like, 'Come to my box.'"

Last summer, Bunting, Roman, 24, and Saira Nicole, 30, were at the center of a tabloid-fueled quality of life crisis. Beyond the bare breasts, complaints about aggressive tip solicitation proliferated. Mayor Bill de Blasio moralized that as "a human being and a parent" he didn't think women should "display themselves this way," and even entertained NYPD Commissioner Bill Bratton's suggestion to "dig the whole damn [plaza] up." Ultimately, the city launched a task force to address complaints about aggressive tip solicitation, and reinforcement cops were assigned to Times Square. In August, when Roman's boyfriend and self-described assistant Chris Olivieri was arrested on the plaza, the women say cops confiscated their street clothes and interrogated them in their robes.

Undeterred, they painted their bodies with words like FREEDOM and EQUALITY.

"A woman's body is always going to be commercialized," Nicole told us at the time. "But as soon as a woman takes control and says I'm going to commercialize myself, that's a problem." 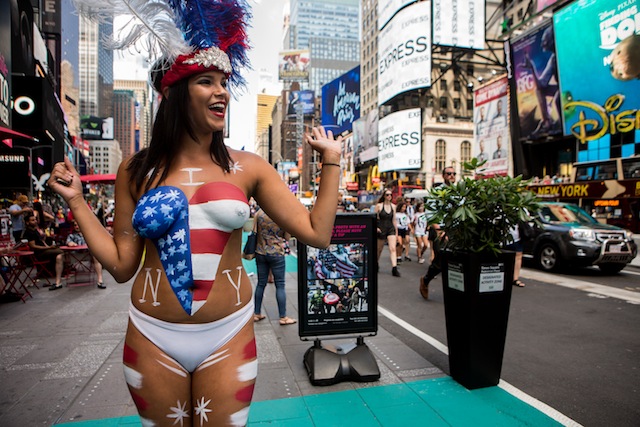 The group said Thursday that their daily earnings haven't taken a dip compared to last year. In the first two weeks of the enforcement, they haven't been fined, or even seen any tickets administered. Cops don't mind if they wander from the zones, as long as they're not making transactions. (Earlier this month, when a reporter asked NYPD Times Square Commanding Officer Captain Robert O’Hare if a desnuda could walk outside a DAZ if she wasn't asking for money, O'Hare nodded.)

Still, the zones feel tense. There are several small groups of desnudas on the square, and Nicole accuses some of them of making "improper or not as classy poses."

"Everyone sees red, white and blue and feathers, and it's like we're all together," she said. "So if one girl from a set we don't really participate with is doing things, it's like we all do it. Whereas before we could say, 'Okay, we'll stay on this side of the block, you'll stay on that side.'"

Then there are the costume characters they say dive into their pictures and demand tips—some characters had similar grievances last week—and the mimes and magicians who take up most of the zone when they're putting on a show. "If anything it makes it even more hostile [than] last year," Bunting said. "The emotions are running high."

A new Desnuda in Bunting's group, who gave her name as C., worked at a pharmacy until earlier this summer, when she met Roman and the others on the square. ("I was just chilling, and Angel was like, 'You want to come work with us?," she recalled.)

C. said on Thursday that being confined makes her feel nervous. "It puts us on the map," she said. "A lot of people don't like seeing us like this. That's their prerogative. But when people come and threaten us, you can just Google Map us and see exactly where we are at any time."

C. said she hasn't been threatened personally, but that last week someone told Olivieri that he had a gun. "If someone was to leave a suitcase here unattended…" she trailed off. "You know what I mean?"

For Bunting, the placement of the zones adds insult to injury.

"The ideal spot is where they won't let us be now," she said, pointing across 45th Street towards the army recruitment station. "You get the good views there, and you know that's where people are going to congregate. That's where the most money is. Here it's just passersby."

"They [the Times Square Alliance] knew exactly what they were doing," she added.

This week, the Department of Transportation widened the zones by two feet, to provide performers with a bit more space.

"We have always wanted these rules to be a system that works for everyone, including New Yorkers who commute to work in Times Square each day, as well as the people trying to make a living on the plazas," said a Times Square Alliance spokesperson.