Three women who pose painted and topless for tips in Times Square say that ten undercover police officers collected and removed their clothing, purses, cellphones and wallets from the pedestrian plaza at 42nd Street last Wednesday night, while they were using the bathroom at a nearby parking garage. The women had to walk nine blocks in their paint and robes to the Midtown South precinct in order to retrieve their possessions. There, before returning any items, detectives questioned them each separately in an interrogation room. None of the women had been formally arrested.

"They questioned us in our robes," said 32-year-old Angel Bunting. "I think they were holding our property to get us in there, so they could interrogate us."

The clothing sweep and subsequent questioning coincided with the arrest of their assistant Chris Olivieri, 25, on an outstanding trespassing warrant from March. According to the women, Olivieri spends afternoons on the plaza holding their tips (the women say they keep the "majority" of them), running for snacks and tampons, guarding their clothing, and painting their breasts, backs, and legs.

The next day, soon after Olivieri appeared before a criminal judge, Mayor de Blasio detailed his plan to regulate topless painted women and costumed characters who pose for pictures and tips in Time Square's pedestrian plazas. "There will be plenty of arrests," he said, referencing Olivieri's as proof.

Neither panhandling nor being topless is illegal under New York state law. However, the Daily News, the mayor, and Governor Cuomo have recently tried to imply that male "managers" ("pimps," if you read the tabloids) force the women, so-called "desnudas," to work.

On Saturday afternoon—the women's first day back on the pedestrian plaza after Olivieri's arrest—a handful of state police passed through, with three representatives from the Department of Labor who asked the women if they felt that their working conditions were "safe."

"We have nothing to hide," Bunting said. She, Saira Nicole, 29, and Olivieri's girlfriend Amanda Roman, 23, were the only desnudas out that afternoon, walking near 42nd Street in heels and headdresses, posing with tourists, and accepting tips. They said that the other women had been deterred by the media attention, as well as Olivieri's arrest.

"We want to negate what people are saying about us objectifying ourselves," Bunting added. She had the word "EQUALITY" painted down her back. "If you want to know why we're out here, you can ask us, or you can read us."

"A woman's body is always going to be commercialized," said Nicole. "But as soon as a woman takes control and says I'm going to commercialize myself, that's a problem." 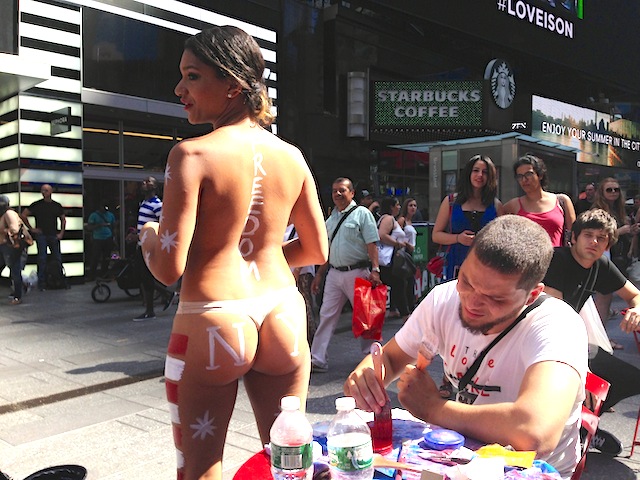 When Bunting, Nicole, and Roman returned from the bathroom last Wednesday around 9:00 p.m., Olivieri was already in handcuffs. They say that officers first sent them to the NYPD substation across the plaza, at 42nd Street and Broadway. There, they were told to walk to Midtown South, on West 35th near 9th Avenue.

"We're a team out here," Bunting later told us. "Nobody's role is more important than anybody else's." Bunting said that the women sometimes work in pairs, splitting tips. Otherwise, their tips are their own.

Asked how Olivieri makes money, Bunting replied, "We absolutely take the majority of the tips. We appreciate what he does for us, so it's only right to give him some." (Neither Olivieri nor the women would tell us how much they make on a typical day, although they all said repeatedly that they're "not in it for the money.")

While Bunting sat through what she estimated to be a 45-minute interrogation with detectives ("I felt I had nothing to hide," she said), Roman refused.

"When I went in there I was like, 'Is this legal for you to hold my property in a room in order to interrogate me?' And they told me no, you can go now." When the women left the precinct at 10:30 p.m., a Daily News photographer was waiting for them.

An NYPD spokeswoman confirmed that officers had "spoken" to the women and that it had been voluntary, stressing that the word "interrogation" was not used. She would not confirm where the conversations took place, and she declined to comment on the women's personal items. 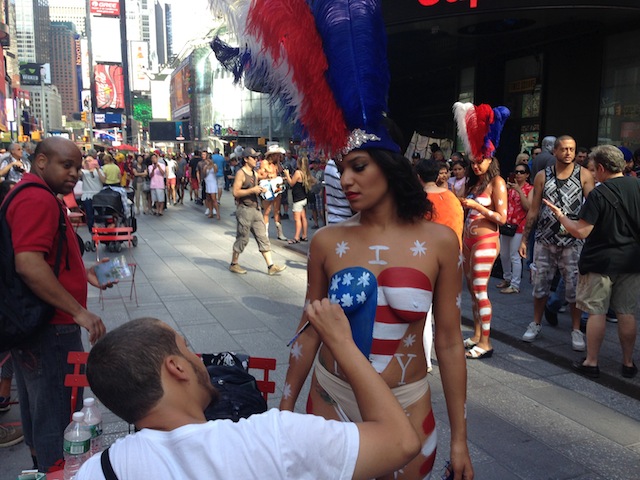 From the front (Emma Whitford/Gothamist)

Meanwhile, Olivieri says that he was stripped of his keys, cellphone, and identification, and questioned until 3:00 in the morning, strictly about Times Square.

"They had the task force waiting for me at the precinct," he said. "The first question they asked me was, "'What is Times Square about?' And my question for them was, 'What am I locked up for?' Because interrogation is supposed to be about what I'm getting locked up for. They wanted to know where I live, and if the girls stay with me. They asked me if I have foursomes with the girls. They asked me, Are you a pimp? Are you soliciting sex?'"

"I'm the person that makes sure nothing happens to them, makes sure that no one robs them for their money," Olivieri later told us.

The NYPD confirmed four arrest warrants on Olivieri's record for turnstile jumping, marijuana possession, trespassing on NYCHA property "without permission or authority," and aggravated harassment for allegedly "threatening physical harm" to an ex-girlfriend over the phone in April 2014. Assistant DA Meghan O'Brien brought up this last charge during Olivieri's arraignment.

Olivieri told us that he was taken to the Manhattan Detention Complex on White Street (a.k.a. the Tombs), where he spent the night without food or water. "All of the inmates in there had ID on them, except me," he said. On Thursday, he pled not guilty in Manhattan Criminal Court to the trespassing charge, and his bail was set at $1,000.

Roman says she posted Olivieri's bail at 7:00 p.m. on Thursday. When Olivieri presented a voucher to retrieve his keys, ID, and cellphone, the NYPD withheld his phone and ID as evidence. "I think they held his ID thinking that we would not be out here without Chris," Bunting said. As of Sunday evening, Olivieri was still without ID. The NYPD declined to comment. 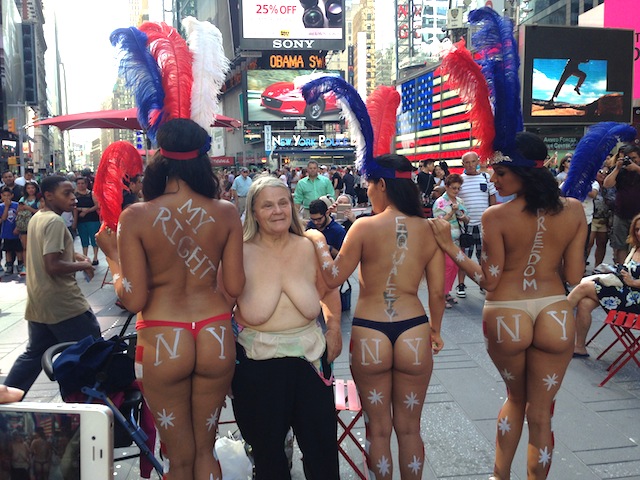 Roman, Bunting and Nicole show off their new slogans with a proud supporter on Saturday (Emma Whitford/Gothamist)

In its coverage of Olivieri's arrest, the Daily News reiterated that the NYPD cannot arrest women for soliciting tips while topless. However, Bratton told the tabloid that the NYPD is "actively investigating" the men who work with them.

"If they had just asked us to come in for questioning instead of going about it in a sneaky way and getting us in there under false pretenses, it may not have been such a big deal," Bunting said. "I have no problem answering questions. They felt like they had to have Chris as bait."

In addition to the "Task Force To Curb Topless Individuals," helmed by Police Commissioner Bratton and City Planning Commissioner Carl Weisbrod, the mayor called for a heightened NYPD presence in Times Square last week. "The NYPD will enforce any infractions of the law," he said. "Their presence will be felt deeply."

On Sunday evening, a handful of other painted women had retuned to the plaza, in addition to Bunting, Nicole, and Roman. They all wore sequined bras.

"I guess they're scared," Bunting said of the low turnout during one of her breaks, a robe covering her bare chest.

Earlier that day, the annual National Go Topless Day parade had diverted unexpectedly around Times Square. "The news headlines are more degrading to us than anything we could do out here," she said. "They're vilifying us and it's not fair. We were determined to come back out and show people that they're not pushing us out of here. We're fighting to the end."

"Have your task force," Bunting added. "Spend your ridiculous money."