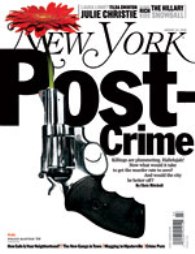 New York magazine's cover feature is all about crime in the Big Apple. There are a number of articles, from getting the murder rate to zero (last year it was at the lower in 40-plus years with 494 murders) to those Criminals Gone Wild videos and a look at the violence plaguing Brownsville. But most intriguing is Adam Fisher's personal account of getting mugged in Bushwick.

Fisher moved to Bushwick because it was "the New York I was searching for—a scrappy loft neighborhood full of young bohemians camping in their studios. This was the pre-gentrified New York I wanted to be a part of." Though "bleak, rubble-strewn," Fisher enjoyed the grittiness - until he was mugged and beaten at the Morgan Avenue L subway station. Hit with either a pipe, two-by-four, or butt of a gun, Fisher was robbed of $28, suffered a broken upper jaw and split lip, and decided to move to San Francisco.

I’m not quite the same person I was. Blight, graffiti, empty buildings—the signifiers of every artsy New York neighborhood for the last 40 years—have lost the romantic appeal they once held. I carry a knife now, a small utility blade that I picked up at the hardware store. And when friends of mine get nostalgic for the bad old days, when lofts were cheap and New York was edgy, I tell them that it’s all still there, if you know where to look.

Well, that's a lesson, all right. But even more gentrified areas have crime - we hear that a mother with her young children was mugged 2nd Street near Prospect Park in Park Slope, concerning all the parents on the Park Slope parents' listserv!

#apple
#big apple
#brooklyn
#bushwick
#crime
#morgan avenue
#new york
#New York I
#park slope
#pre-gentrication
#prospect park
#san francisco
#wild
Do you know the scoop? Comment below or Send us a Tip
A new Gothamist is coming! We’ve moved comments over to our beta site. Click here to join the conversation and get a preview of our new website.