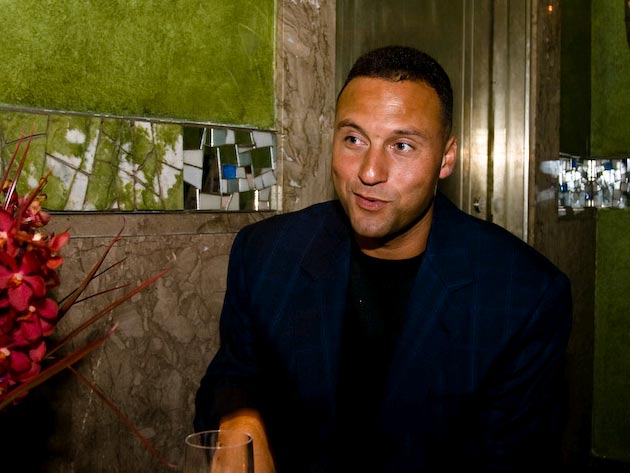 From a new NYC sports club bearing his name to the last season at Yankees Stadium, Derek Jeter has a busy year ahead of him. Gothamist asked the Yankees captain about his partnership with 24 Hour Fitness to bringing 24 Hour Fitness - Derek Jeter gyms to the city and his thoughts on the "house that Jeter built." 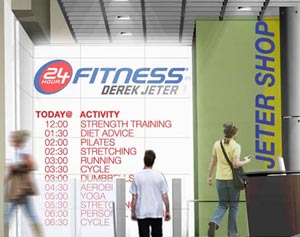 The first Derek Jeter-branded gym will be located at 225 Fifth Avenue, across from Madison Square Park), scheduled to open in late June. Two other locations, one in the Citigroup Building and another in Soho, will follow later this year. The 28,000 square foot gym will have extensive cardio equipment and free weights, plus a Derek Jeter pro shop, group exercise classes, a sauna, locker room with laundry service, and Starbucks coffee. Even though 24 Hour Fitness's Lance Armstrong Signature Clubs have "Lance Armstrong cycling rooms" and the Magic Johnson Signature Clubs have NBA-sized basketball courts), the Derek Jeter gyms won't have batting cages.

Jeter explained, "What I didn't want it to be was just a gym for baseball fans. Working out is a lifestyle. I think everybody should work out, it helps you feel better about yourself. You don't have to be an athlete, you don't have to be an aspiring athlete. But I didn't want only Yankees fans or only baseball fans. I wanted it to be acceptable for everyone, I wanted it to be a lifestyle gym."

There will be some baseball connection: 24 Hour Fitness CEO Carl Liebert (pictured below) confirmed that 24 Hour Fitness exercise trainers are developing group exercise classes around baseball training exercises, like a "Derek Jeter workout." "These guys play 160-plus games a year. When you think of other professional athletes, nobody competes that long and that many games." Emphasizing his commitment to working out as a baseball player, Jeter said, "We start in February for spring training and hopefully [play] until the end of October...take two weeks off. So it's really a 12 months out of the year job." 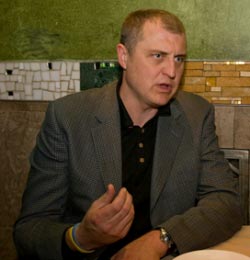 Jeter, who has an equity stake in the partnership, and the chain, which has other celebrity partners like Shaquille O'Neal and Andre Agassi, have been working together many years. Jeter called it "a real long process" because in New York, "you can't just say,'I'm going to build a gym right there on the corner.' It takes some time to find the real estate."

Liebert described what happened after 24 Hour Fitness whittled down the locations to 35: "We put Derek in a car...he drove around with the real estate team for the day." Jeter looks forward to the Citigroup location "because that's near my house."

Jeter thinks the most compelling part of the gym is the fact that it's 24 hours. "You hear 24 hours, you hear the city that never sleeps, the first thing that comes to mind is New York City. And when you have a gym that's 24 hours a day...whether you work in the mornings, you work in the evening, you like to work out early, you like to work out late, and not every gym can say that."

When asked what he thinks of the new Yankees Stadium being dubbed the "house that Jeter built," he laughed and said he's heard a lot about it from his friends. He's been amazed how fast the new stadium is going up and though he's excited about it, "More and more, I'm looking forward to the last season at the old stadium. I don't think it's really set in yet that we're moving to a new stadium. But this year is going to be special, the All-Star game's going to be there...it's so full of tradition...it's going to be a fun last season."