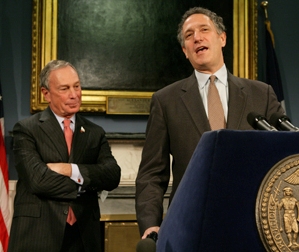 Deputy Mayor Dan Doctoroff, who was in charge of Economic Development and Rebuilding in the Bloomberg administration, announced he would resign by the end of the year. The Post called the news "stunning," but we'd like to call it "classic," because his new job will be president of a little company called Bloomberg LP.

At a City Hall press conference, Mayor Bloomberg said, "As a result of Dan's efforts, we've allowed for the creation of 130 million square feet of commercial and residential space, three new sports arenas, a new subway line, 2,400 acres of parks, the regeneration of more than 60 miles of waterfront, all while displacing only 400 residents." Doctoroff, who has been part of major planning initiatives like the 2012 Olympics bid (and West Side Stadium attempt), PlaNYC, and the Hudson Yards, was only paid $1/year (or 93 cents after FICA), as he made a lot of money during his days as an investment banker. He even referred to his salary, saying, "People ask me all the time if I have regrets about having done this for the past six years. They ask me, you missed the biggest boom ever in the private equity market, the job that I left before. I would have done this job for nothing."

Bloomberg said he tried to get Doctoroff to stay, but when he made it clear he would leave, the Mayor and Bloomberg LP chairman Peter Grauer asked the city's Conflicts of Interest Board if it was okay to offer the private sector job to Doctoroff. As for what will happen with the city's project, per The Politicker, Doctoroff said, “I could potentially remain as the chairman of [the] Hudson Yards Development Corporation, as I am today. Queens West, we haven’t even formed a corporation yet but I could, theoretically, remain or become the chairman."