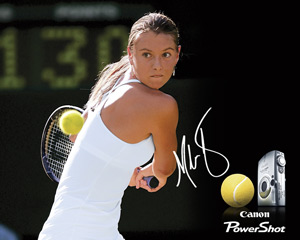 The Japanese ad agency being sued by one of its former employees for forcing him to go to brothels is countersuing, saying that Steve Biegel was fired for poor performance, not because he complained about sex shenanigans at work. Details of Biegel's lawsuit were released late last week and included info on ad shop CEO's peculiar affinity for crotch shots of women, including one he took of Maria Sharapova and passed around the office. That particular photo was entered court records as an official evidence item.

Biegel accused the CEO of Dentsu Holdings USA of forcing him and other co-workers to visit brothels and have sex with prostitutes as a proper way of commemorating successful business dealings. The ex-employee said he was horrified and debased to be put in such situations. Dentsu's countersuit said that Biegel's firing in November 2006 was part of a general management overhaul and the company was now suing him for defamation, especially to corporate clients.

Dentsu allegedly identified Biegel, who was a creative director at the agency, as a "weak link" in its management chain. Biegel's lawyer cites his client's reception of an "Effie" award for advertising on the agency's Canon account as proof that Dentsu's claims are spurious. It was on a shoot with Canon spokesmodel Sharapova that the upskirt photograph was taken.