On Tuesday night, Harold Deamues stepped out of his apartment and saw his neighbor, 66-year-old Deborah Danner, standing quietly in the hallway. Minutes later, that same hallway was crowded with NYPD officers and security guards employed by the building at 630 Pugsley Avenue in the Bronx's Castle Hill neighborhood, after a resident called 911 to report that Danner was emotionally disturbed. Until that moment, Deamues felt it was all routine.

"It thought it was normal," Deamues, 27, said Wednesday. "I already knew they were here for her. They've come up at least 20 times."

But the NYPD's attempt to subdue the mentally ill Danner had a drastically different outcome Tuesday. Shortly after 6 p.m., NYPD Sergeant Hugh Barry entered Danner's apartment and encountered her in a bedroom, allegedly holding a pair of scissors. According to the NYPD, Barry "persuaded" Danner to put down the scissors, at which point she allegedly picked up a baseball bat and moved to attack the officer. Barry opened fire, striking Danner twice in the torso. She later died of her injuries at Jacobi Hospital.

At 7 p.m. on Wednesday night Deamues and his wife were among the dozens of protesters who rallied outside of 630 Pugsley Avenue, demanding justice and an end to what they claimed was a persistent lack of accountability and restraint in the NYPD. Flanked by a small group of police officers that kept their distance, the demonstrators shut down numerous streets and busy intersections across Castle Hill as they marched to the 43rd Precinct stationhouse, a mile and a half away. As he walked, Deameus carried his 6-month-old daughter in his arms. It was his first time protesting.

"Every time they came, they'd done it right," he said, recalling past interactions between his neighbor and the authorities. "They should've known how to handle her." 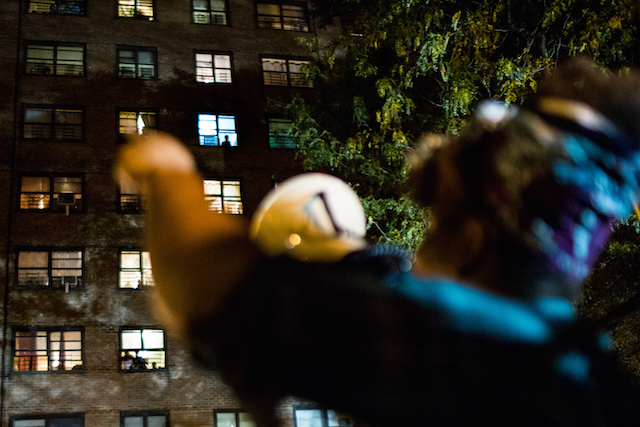 Protesters decrying the police shooting of Deborah Danner shouted to residents of the Bronx's James Monroe Houses, encouraging them to join their cause (Scott Heins/Gothamist) 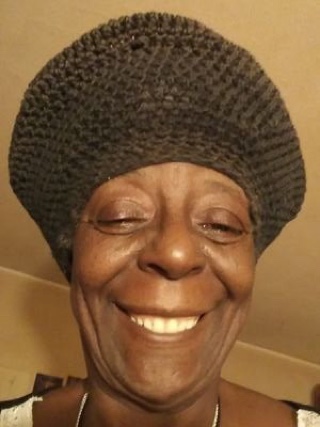 "Deborah Danner should be alive right now, period," the Mayor continued, going on to stress that Barry had had a chance to deescalate his confrontation with Danner and wait for a specially-trained Emergency Service Unit to arrive and assess her needs.

"That's not how it's supposed to go. That's not how we train," NYPD Commissioner James O'Neill said yesterday. "My commitment as police commissioner is to find out what went wrong and why. What is clear in this one instance—we failed."

On Wednesday, the NYPD confirmed that Barry had been placed on modified duty until an internal investigation could be completed. The NY Post reports Barry was sued twice for police brutality in the last four years, with one case alleging that he and ten other officers pepper sprayed, punched, and kicked a man during a confrontation in Times Square. That suit was ultimately settled.

"We're hurt, we're her neighbors," building resident Millie Rodriguez, 50, said. "We never thought that—you know, like everybody else you get sick, you go to the doctor, you come back. She's not coming back."

Third-floor resident Karl Nickerson framed the confrontation between Barry Danner as both a deadly case of police aggression against black New Yorkers and a failed opportunity to show a real commitment to deescalation. "This was basically a training exercise where they could have shown that they know how to act to give the community more belief in them, to bridge that gap." Nickerson said. "It could have been a display of partnership, that it's not 'Us against you.'" Nickerson was one of many who asked why Barry chose to use his firearm, despite being equipped with a TASER stun gun when he encountered Danner. 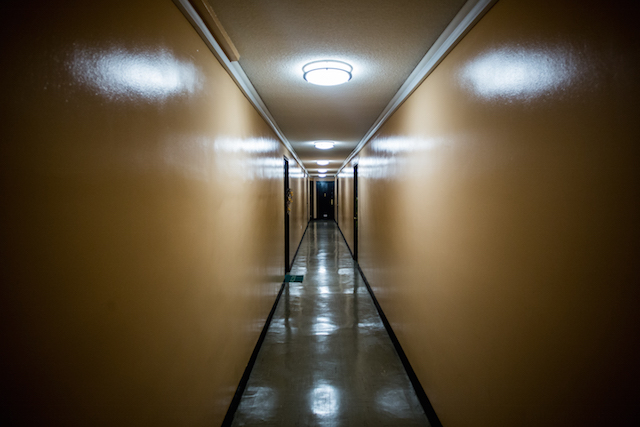 "People don't trust the cops. This was not a criminality," he said. "This was a situation where it was a mental health problem, a person who needed someone to talk to. You get that person's confidence, or if you have to, subdue them. Something not lethal. She was sick—she lived her own hell every day."

The Times reports that in a neatly-typed personal essay filed away by her attorney, Danner described a painful battle with schizophrenia that had gone on for 30 years. “We are all aware of the all too frequent news stories about the mentally ill who come up against law enforcement instead of mental health professionals,” Danner wrote in the essay, “and end up dead.”

Waving signs bearing Danner's portraits and shouting "Indict! Convict! Send these killer cops to jail!" the protest group briefly paused in the courtyard of the James Monroe Houses, a NYCHA complex near the 43rd Precinct. Using a bullhorn, the group's leaders called for residents to come out of their buildings and join not only that night's march, but a sustained citywide push against police justice and institutional racism.

Standing in the crowd, Deamues shook his head. "I don't feel safe anywhere. I'm a black man, I've been in the streets. I get pulled over for no reason, my rights get thrown out the window once I get stopped, so that's why we're here now."