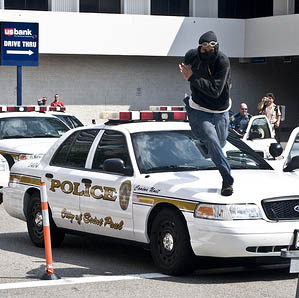 No surprises here; more reports of heavy-handed police tactics are filtering in from the Twin Cities, where the NYPD has been consulting with local law enforcement on how to handle demonstrations during the Republican convention. Salon has a long story on police and federal officers ("in riot gear, with semi-automatic weapons drawn") raiding houses where protest organizers are suspected of staying, in some cases seizing computers, journals, and political pamphlets.

The Times guesstimates over 250 people have been arrested in violent clashes with police, and the article features a terrific photo of an officer on his knees blasting pepper spray at demonstrators. Police are wielding long wooden sticks and have been firing “less lethal” 40-millimeter projectiles at crowds, beanbags, and concussion grenades. A prominent Democratic Party strategist, Donna Brazile, was hit by pepper spray while trying to circumvent protesters outside the convention hall. She tells the Times, “I got a strong whiff — just toxic — and my head and throat are still hurting." And members of the Republican delegation from Connecticut say they were shoved and spat upon by protesters near the convention hall.

Also among the arrested are two producers of Pacifica radio's Democracy Now!, which is broadcast from local affiliate WBAI. The two were swept up during a demonstration yesterday and charged with "suspicion of felony riot." When Democracy Now! host Amy Goodman tried to intervene in the arrests by explaining that they were press, she was also arrested, and charged with "obstruction of a legal process and interference with a peace officer," according to Huffington Post. Video of Goodman's arrest after the jump.

Photo courtesy jcbehm and The Uptake.