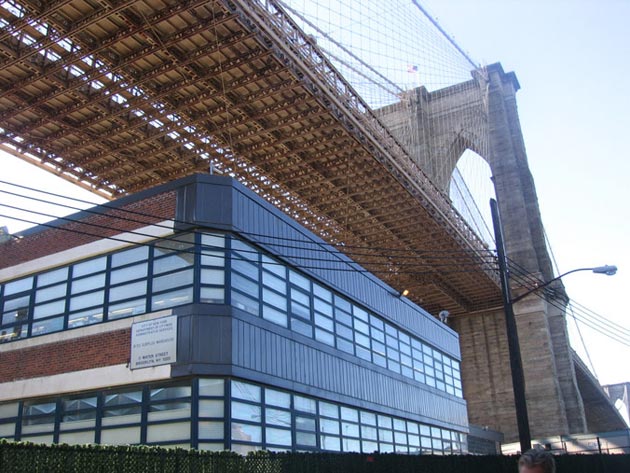 Everyone is buzzing about the Brooklyn Bridge Park development today. The latest is that the project (which has been stalled time and time again) could begin next month as a wrecking ball tears down a piece of the area's history. The Daily News reports:

If approved today, the $18 million construction phase would include the demolition of the historic Purchase Building [pictured] and the removal of portions of five piers, officials said.

The Purchase Building, built with federal Work Projects Administration funds in 1936, had been used as a temporary headquarters for the Office of Emergency Management following 9/11, when its Manhattan office was destroyed.

Supporters of the $150 million park plan believe the landmarked building would bisect the park, interrupting its continuity and blocking views of the river.

We'll be damned if we let some historic building block our view of the pristine East River! Of course, the Landmarks Preservation Commission voted to demolish the building in February of 2006, so it shouldn't come as a shock, despite the fact that protesters and preservationists have tirelessly fought against that decision.

"It's further evidence that the [Empire State Development Corp.] cares so little about what the community thinks," said Judi Francis, president of the Brooklyn Bridge Park Defense Fund. "All parties, for and against the project, have wanted to preserve it because it's a landmark."

What will replace the historic landmark? An ice skating rink. And "the piers will eventually be home to basketball and handball courts, a rolling landscape called Prospect Hill, soccer fields, playgrounds and a promenade." Word should be in soon if the demolition/construction will be taking place next month, and the Park may even be ready this decade.