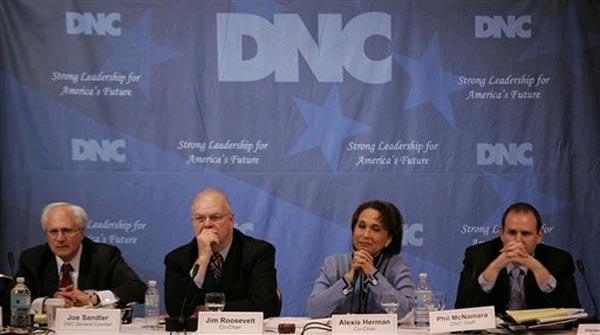 In a televised meeting that could be subtitled "Death by a Thousand Paper Cuts," the Democratic Party's Rules & Bylaws Committee is meeting today to discuss and hear testimony on the dilemma of Florida's and Michigan's delegates.

The controversy over the states' delegates is due to the fact they essentially violated DNC rules by holding their primaries too early, so the DNC stripped them of their delegates. Clinton's campaign is especially eager to fight the decision, since Clinton won both primaries, though Clinton, Barack Obama, John Edwards and other Democratic candidates all agreed not to campaign in those states. Obama even took his name off Michigan's ballot, but things are a little messy when it comes to Florida, because its Republican-controlled State Legislature partly had a hand in pushing up the primary, leaving some Dems to accuse the GOP of sabotaging them. Obama's campaign has suggested it would be open to a compromise.

The RBC (details about the meeting here) has heard testimony from Florida and Michigan DNC members, as well as Clinton and Obama supporters and campaign staffers. It's unclear when a decision will be made (a partial resolution end of the weekend?), so it remains to be seen if DNC chairman Howard Dean's opening remarks will be heeded: "It has got to stop. We have got to come together and unite our party. Every one of us has the responsibility to help ensure that our party is united."

Politico, the Times' Caucus blog, and Talking Points Memo are all liveblogging the meeting.

Update: Ten hours after the meeting started, the committee decided to seat all the Florida and Michigan delegates, but the delegates will only get half votes. That way, all delegates get to go to Denver. The numbers break down this way, per CNN:

The committee's ruling gave Clinton 105 pledged delegates from Florida and 69 from Michigan, with a total of 87 votes.

Obama received 67 pledged delegates from Florida and 59 from Michigan, casting a total of 63 votes.

That tally leaves Obama ahead by the equivalent of 174 delegates.

However, Clinton's camp had a mixed reaction, with its statement, "Today's results are a victory for the people of Florida, who will have a voice in selecting our party's nominee and will see its delegates seated at our party's convention. [But] we strongly object to the committee's decision to undercut its own rules in seating Michigan's delegates without reflecting the votes of the people of Michigan." In fact, when the motions were voted on and the announcement made around 7:15p.m. (the committee voted in public), Clinton adviser Harold Ickes was sharp in his criticism and pro-Clinton supporters disrupted the proceedings, yelling, "Denver!"