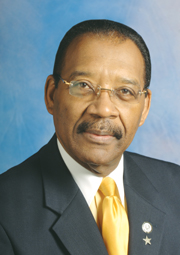 If you think John McCain's defeat Tuesday means you no longer have to hear the word "maverick" every five minutes, think again! The Associated Press reports that "four maverick New York City lawmakers" are refusing to back a member of their own party, Malcolm A. Smith, for majority leader, after over four decades of Republican control of the State Senate. Three of the four holdouts are Latino legislators who feel Latinos have been underrepresented in leadership roles in government, so yesterday they met with GOP leaders to discuss how they could serve the GOP and what’s in it for them should they defect.

One of the dissenting Democrats, Rubén Díaz Sr. of the Bronx (pictured), tells the Times: "There’s a concern that we have a black president, a black governor and we have a concern that we have to be sharing power." The so-called "Gang of Four" also met with Governor Paterson yesterday, and one of them, Pedro Espada Jr., told Paterson he might challenge Smith himself for majority leader. Speaking anonymously to the Daily News, one of the lawmakers says, "We told the governor we're the biggest minority in the state, and we keep getting nothing but lip service and parades." The other two holdouts are Carl Kruger of Brooklyn and Hiram Monserrate of Queens

Democratic Senators gathered for a closed-door meeting in Albany yesterday to rally behind Smith, but according to a spokesperson for the independent caucus, Smith "will only have 28 votes and will not have the 32 he needs" without the renegade Democrats. A New York City senator who backs Smith says, "This is nothing but a caucus of backstabbers. They can't even trust each other." But considering that Espada Jr. ran as Republican in '02 and Díaz is a Pentecostal minister strongly opposed to gay marriage—which Smith has said he would allow a vote on—Republicans shouldn't have too much trouble wooing the mavericks. (Sorry!)

#election
#fight
#Gang of Four
#hold out
#majority
#maverick
#new york
#nyc
#results
#senate
#State
Do you know the scoop? Comment below or Send us a Tip