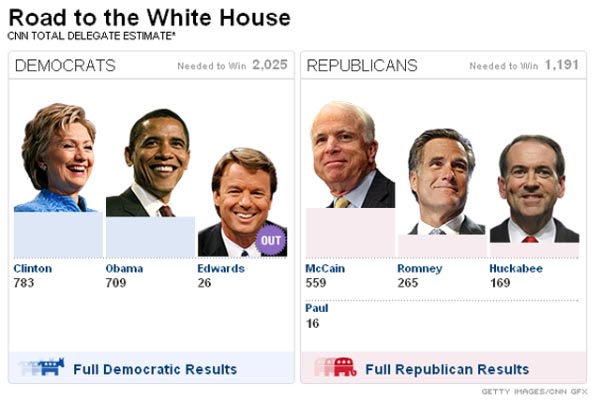 It was an exciting night of Super Tuesday primary returns. In the Democratic contest, Hillary Clinton won eight states, including New York, New Jersey, Massachusetts, and California, but Obama won twelve - Illinois, Connecticut, Alabama, and Missouri - among them (New Mexico is still undecided as the two candidates are in a tie). The NY Times notes that since there were no decisive victories, "an electoral fight...will unfold for weeks to come." Or, as the Post puts it in more visceral terms, "Neither Clinton nor Obama was able to deliver a knockout punch on a night that had once been expected to crown a winner."

On the Republican side, John McCain had decisive victories, by taking New York, New Jersey, Connecticut, Missouri, and California (plus four other states). He said, "Tonight, I think we must get used to the idea that we are the Republican Party front-runner. And I don't really mind it one bit." Mike Huckabee showed strength by winning a number of Southern states, and many believes Mitt Romney, though winning Massachusetts and five other states, lacks momentum.