The pilot who had a mental breakdown aboard a JetBlue flight from JFK to Las Vegas yesterday has been a pilot for most of his professional life, and flown 35 different types of aircraft. Captain Clayton Osbon, 49, is a Wisconsin native who's been flying for JetBlue since 2000. JetBlue CEO Dave Barger told the "Today" show this morning that Osbon is a "consummate professional" whom he has "personally known" for years, adding that there was nothing in his record to indicate that he would start foaming out the mouth and running around the cabin screaming about a bomb, al Qaeda, the plane going down, and the urgent need for everyone to "say the Lord's prayer."

According to a 2011 magazine profile on Osbon, the pilot also has a sideline selling weight-loss products, including a "shake mix that tastes like a cake mix." He also dreams of starting a new career as a motivational speaker, a move that might be out of reach after yesterday's little incident. According to Osbon's Facebook profile, he is also a devout Christian and conservative Republican, and his two favorite activities are "working hard" and "praising God." 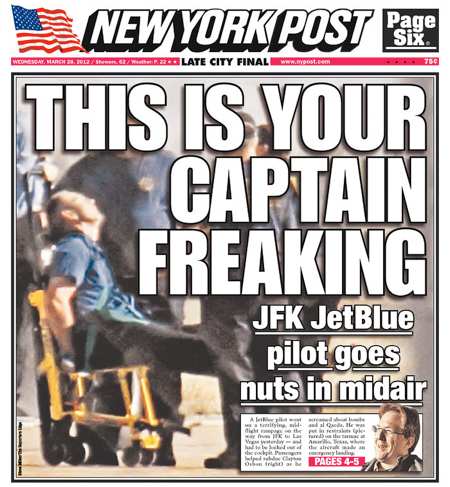 About two hours into the flight, Osbon's co-pilot decided that Osbon had been behaving too strangely to remain at the controls in the cockpit, so he coaxed him out and locked the door. Passengers say Osbon then began running up and down the aisle screaming, "Iraq, Al Qaeda, terrorism, we’re all going down!" Osbon was banging on the door of the cockpit and a bathroom screaming, "I NEED THE CODE! I NEED THE CODE!" That's when the copilot yelled over the P.A. to restrain the Captain.

Retired NYPD Sgt. Paul Babakitis, 51, and passenger Anthony Antolino joined two other men in restraining Osbon, who is 6 foot-4 and weighs 250-pound, the Daily News reports. "As we were restraining him, pulling him away from the cockpit door, he was saying ‘We got Iraq, we got Afghanistan, they’re going to take us down too,’ ” Antolino tells the News. "We each grabbed a different part of his body and we just threw him to the ground." As they struggled with Osbon, he allegedly yelled, "I’m distraught. I’m distraught."

The airline described the incident as "a medical situation," and after an emergency landing in Amarillo, Colson was taken off the plane and brought to a hospital for evaluation. Elton Stafford, who lives across the street from Osbon in Richmond Hill, Georgia, tells the AP he was shocked. "Clayton's a great guy," says Stafford. "Loves to have a good time, loves the outdoors. He just loves people."

#air travel
#clayton osbon
#jetblue
#jetblue captain
#meltdowns
#prayer
Do you know the scoop? Comment below or Send us a Tip