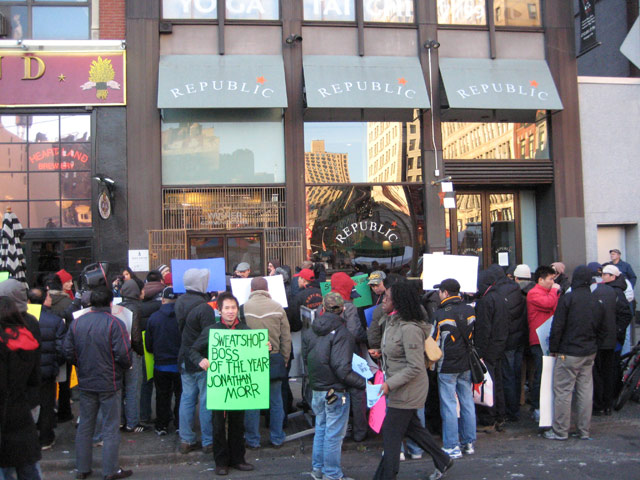 Disgruntled delivery workers chanted "No Justice, No Noodles!" at a raucous demonstration outside Union Square's Republic restaurant yesterday; the crowd was gathered to protest against co-owner Jonathan Morr and his alleged retaliation against eight workers who filed a federal labor-violation lawsuit last April. Seven of those eight workers remain, and they say that since the lawsuit they've had their hours cut dramatically and have been subjected to constant harassment from management, including being cursed at and being served rotten food. Representatives from the 318 Restaurant Workers Union and the Justice Will Be Served! campaign, who organized the lawsuit, were there to support the workers.

Their lawsuit asserts that for almost ten years, workers at Republic have been underpaid and overworked, pulling sixty hour weeks for a little over $2 an hour, with no overtime. The complaint also accuses owners of forcing workers to pay out of pocket for bicycle costs, repairs and cleaning their own uniforms. And yesterday's protest comes only a month after 36 delivery workers from Saigon Grill were awarded $4.6 million in back pay. 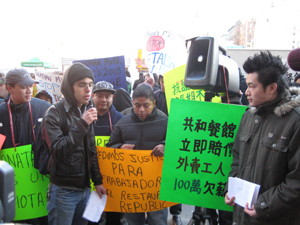 Jerry Weng, who works for the popular noodle chain Ollies, said he is experiencing similarly poor conditions, and that the Saigon Grill victory is inspiring him and his coworkers to demand just pay: "I believe in united power. All of the workers need to come together." Mika Nagasaki, an organizer for the Justice Will Be Served! campaign, told us, "It's really about dignity. End the retaliation, and respect the workers for asking what they are entitled to."

The demonstration was over less than an hour after it began. With all of the cameras put away, one of the owners of Republic, Michael Callahan, emerged to say, "You don't have the facts; they're lying," before storming inside again. (A call to the Jonathan Morr Group was not returned.) Justice Will Be Served! is hoping for a trial date in the near future.

#demonstration
#harassment
#Jonathan Morr
#lawsuit
#protest
#republic
#restaurant
#union square
Do you know the scoop? Comment below or Send us a Tip