Next to the perilous drone of Delancey Street traffic, elected officials and family members gathered earlier today to rename a stretch of Clinton Street after Dashane Santana, the sixth grader who was killed two years ago by a van at the mouth of the Williamsburg Bridge. "She always told me that she would take me out of the projects, buy me a house with a great big kitchen so that I could cook for the whole family," Santana's grandmother, Teresa Pedroza said. "I want to hold her so much right now. She deserved this."

Santana's death was one of many that shocked the city's collective conscience and helped galvanize what would become Mayor de Blasio's Vision Zero platform.

"She has done so much at the early age of twelve," Manhattan Borough President Gale Brewer said in her remarks, pointing to the pedestrian islands and longer crossing times that were installed on Delancey in 2012.

Pedestrian fatalities have also been central to a new state law that will allow the City Council to lower the speed limit.

A source familiar with the DOT's plans says that parts of the Bowery and the entirety of Sixth Avenue will be designated as arterial slow zones in the near future, though Delancey Street is not yet on that list. 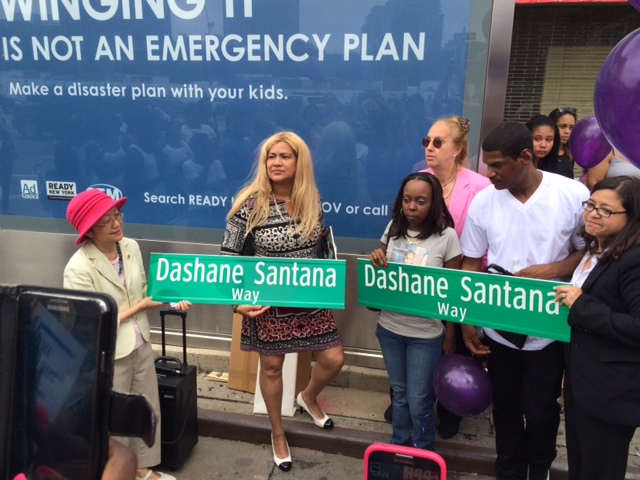 The DOT is already targeting many of the city's most dangerous roads as arterial slow zones, meaning a 25 mph speed limit, new traffic signal timing, and increased enforcement by the NYPD. Some are set to go into effect tomorrow.

"You see the cars coming off that bridge," Councilmember Margaret Chin said, pointing to a wall of vehicles zooming off the Williamsburg Bridge. "They have to slow down. We've made tremendous improvements, but we're going to keep advocating."