Attorneys for NYPD Officer Wayne Isaacs argued in court on Monday that their client was justified in fatally shooting 37-year-old Delrawn Small in a Brooklyn intersection last July 4th because Small was a "menace" who "assaulted" their client.

Monday marked the opening arguments in the criminal trial for Isaacs, the first NYPD officer to be charged by State Attorney General Eric Schneiderman in his role as Special Prosecutor in police-killing cases. Isaacs was charged with second-degree murder and first-degree manslaughter last September in connection with the alleged road rage incident in East New York, which ended with Small being fatally shot three times.

According to prosecutors, Small became upset when Isaacs cut him off "without any warning." At the next red light, Small got out of the car, despite his girlfriend's protestations, and approached Isaacs's car.

Isaacs, who was off-duty at the time, said Small punched him through his open car window before he fired. But Small's family and defense team point to security camera footage that appears to show Small falling back moments after approaching Isaacs's car.

The incident took place near the intersection of Atlantic Avenue and Bradford Street in East New York, shortly after midnight on July 4th.

Defense attorney Stephen Worth took pains Monday to present Small as a large, intimidating person whom Isaacs shot in self-defense. He also argued that Small was "legally drunk" when he approached the car—a position Small's lawyers dispute.

"What you are going to see is a 6'1", 237-pound man, 37 years old at the time, get out of his car, walk two lanes over to the defendant's car, and he's not walking over to have a conversation about safe driving," Worth said. "He's a menace, he's angry, he's intoxicated, and he in fact assaulted Officer Isaacs." 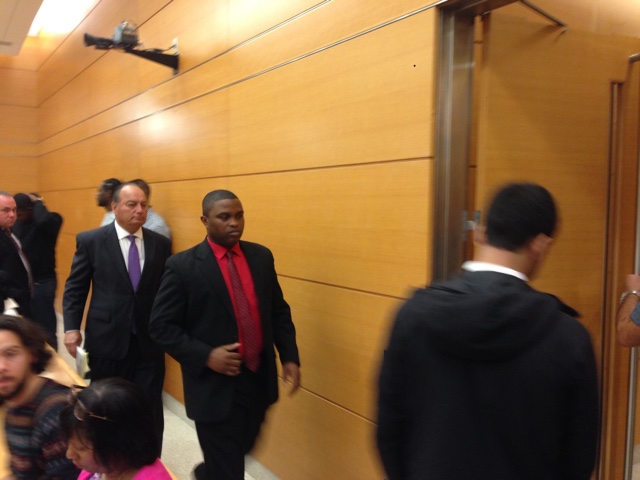 Wayne Isaacs, in red, leaves the courtroom with his lawyer, Stephen Worth. (Emma Whitford/Gothamist)

"I believe they are painting a picture as propaganda to divert the attention from what the real story is," Davis told reporters outside the courtroom. "The real story is that Delrawn was an unarmed man, a father of three, a loving kind man who was killed unjustly by Wayne Isaacs, who had plenty of options but chose to shoot and kill Delrawn in cold blood and leave him in the street."

Prosecutors said Monday that they will show that Isaacs was "callous, [and] indifferent to what he was seeing" as Small lay dying. This is demonstrated, they argue, by Isaacs's failure to attempt CPR, instead making phone calls in the immediate aftermath of the shooting.

"He got out of his car, not to check on this person, not to render medical aid, no," said Assistant Attorney General Jose Nieves in his opening argument. "This defendant stepped out of his car and coldly walked by Mr. Small's body, and barely even looked at him."

Prosecutors also entered two photographs from the scene as evidence, one of which they say shows Small in shorts and a T-shirt and "no bulge" that Isaacs might have construed as a concealed weapon. (The defense tried to block the photos, arguing that they are "shock value and shock value only," but Supreme Court Justice Alexander Jeong denied the request, instead ordering the prosecution to print them in black-and-white and crop out some of the blood.)

"There was absolutely no time for anything to happen that would legally justify this defendant's decision to pump three bullets into Delrawn Small that night," Nieves added. "Even if you believe Delrawn Small may have thrown a punch at this defendant."

Worth countered that "a guilty man flees."

"Maybe we can forgive him for not having compassion for the man who just assaulted him," he added.

Small attended a barbecue with family the night of his death, according to prosecutors, and had three alcoholic drinks "over the course of hours." He helped in the kitchen that night, they said, laughed and joked, and took pictures. Small left around 11:30 p.m. with his girlfriend, Zaquanna Albert, his fourteen-year-old stepdaughter, and his four-month-old son.

"The [defendant's] legal team is making a very tragic mistake here," said Hawk Newsome, president of Black Lives Matter of Greater New York, standing outside the courtroom during a lunch break. "They are saying that somebody being punched in the face is justification for being shot three times in front of their child."

"That's disgusting," he added, "and nobody would make that argument if it was any other situation than a black man being shot by a police officer."

#delrawn small
#nypd
#police killings
#trial
#wayne isaacs
#original
Do you know the scoop? Comment below or Send us a Tip