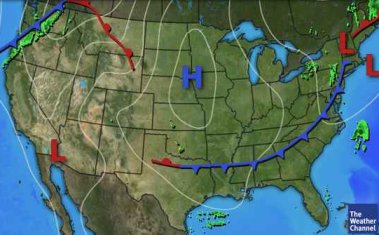 Today is your lucky day! Gothamist has been calculating obscure weather statistics and we're going to share them. Remember how the year got off to an unusually warm start? Flowers were blooming and we were enjoying picnics in the parks? Those abnormally warm days were soon followed by lots of slightly cool days through much of winter, spring and summer. Much like the parable about the tortoise and hare, the slow steady cool weather beat back the jack rabbit start to the year and most of 2007 has been cooler than average.

September has been running about two degrees warmer than normal. Yesterday, which was 13 degrees above average, raised 2007's average temperature in Central Park back to exactly normal. In a sign of 2007's split weather personality, maximum temperatures have been 0.36 degrees above average, while minimum temperatures have been, well, we trust you can do the math. The statistics get a little wild if we ignore the really warm first sixteen days of the year. Since January 16th, daily highs have been 0.51 degrees below average and daily lows 1.2 degrees cooler than normal. Those numbers may not sound large, but without those two really warm weeks last January, 2007 would have been on track to be one of the coldest years in the last three decades.

Moving on to the weather at hand, once again we've had a cold front pass through town without kicking off promised rainfall. There's a dying band of showers heading toward the city. It looks to us like the showers will arrive in the early afternoon, but they appear to be rather inconsequential. Later today, and the whole weekend should see clear skies. Highs today and tomorrow will be in the mid-70s. Sunday will be a couple degrees cooler. Next week is shaping up to be http://www.weather.com/outlook/health/allergies/tenday/10001">sunny and mild as yet another big high pressure system squats down on the eastern half of the country.

Surface weather map showing showers to our west and the big high pressure system that promises a beautiful weekend from weather.com