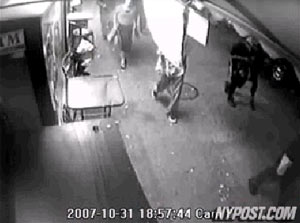 The Queens DA's office is allegedly split over how to handle a Halloween night fight in Howard Beach.

Five black and Hispanic men were arrested and Queens DA Richard Brown called it "serious assault" because "the defendants are accused of being part of a mob armed with sticks that chased and then attacked a group of young people."

The divided feelings in the DA's office are due to the fact that the assault may have been racially motivated. One of the white victims claimed someone told him, "I'm going to kill you, you white m-----f----rs," which might suggest the attack could be a hate crime. On the other hand, hate crime charges against two white men who attacked a black youth in Staten Island last month were dropped due to a lack of evidence.

One of the defendants claims that he and his cousin were actually being chased by 100 white youths who called him "n-----." Terrance Scott, who does not have a police record, told the Daily News, "I just crossed the street and they started chasing me. Gunshots rang out. Then we got stopped by police."

The investigation into the crime is ongoing.