Until last night, we never doubted that a few dedicated people screaming at their televisions could change the world. But no matter how loudly we shouted at Obama to roll up his sleeves and stop being so professorial, he just didn't listen. In the struggle to sucker in those voters who somehow haven't yet made up their minds by now, Mitt Romney came out on top, coming across as presidential, cogent, even human—which is terrifying. Most of what he said was vague bullshit, but we suspect undecided voters aren't going to be spending too many late nights checking all those stupid facts. Daily Beast columnist Andrew Sullivan summed it up well:

...I can see the logic of some of Obama's meandering, weak, professorial arguments. But this was a disaster for the president for the key people he needs to reach, and his effete, wonkish lectures may have jolted a lot of independents into giving Romney a second look.

Obama looked tired, even bored; he kept looking down; he had no crisp statements of passion or argument; he wasn't there. He was entirely defensive, which may have been the strategy. But it was the wrong strategy. At the wrong moment.

The person with authority on that stage was Romney—offered it by one of the lamest moderators ever, and seized with relish. This was Romney the salesman. And my gut tells me he sold a few voters on a change tonight. It's beyond depressing. But it's true. 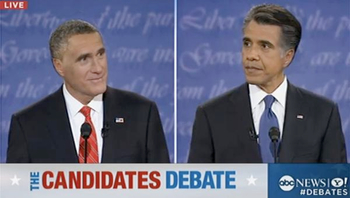 We'd really love to know what kind of next-level political jujitsu Jedi Obama is working, because he's freaking us out. Last night you almost got the sense that deep down he'd be fine with losing nobly rather than go through four more years dealing with Beltway obstructionists. And he's not the type to go out swinging—he'll just quietly gather up his books and pamphlets and walk away whistling Pachelbel's Canon. It's true Obama's known for his coolness, but there's "cool" and then there's catatonic. Why didn't he take Biden's advice and rub one out before going onstage?

But perhaps we can take comfort in USAToday, where David Jackson reminds us that "presidents seeking re-election have often struggled in their first debates: Jimmy Carter, Ronald Reagan, George H.W. Bush and George W. Bush. Two of those wound up winning re-election anyway; two lost." Too bad Barry O reminded us so much of wonky cardigan Carter last night. Can we get someone to tape a radio transmitter to his back for the next debate? Oh well, at least Sam L isn't sweating it:

What Really happened tonite?! NOBODY changed who they're voting for!! NOBODY!!!

Obama's team is equally whatever and predict that the debate was meaningless. “If they think they did so will, then you show me by next week that Ohio’s tied and Iowa’s tied and Nevada’s tied,” Obama adviser David Plouffe told Talking Points Memo. “That’s what this race is about.” Romney strategist Eric Fehrnstrom, on the other hand, was passing around the cigars: “If this had been a boxing match, the referee would have called it." Speaking of the referee, where the hell was Jim Lehrer? The Week's Marc Ambinder makes a good point:

Since Jim Lehrer decided to stay out of the way for the first hour, he did not provide the service Obama most required of the moderator, which was to serve as a fact check/reality board for both candidates. Instead of prodding Romney to, for example, explain the holes in his deficit plan, he left that task to Obama. A robot saying "Your response?" would have been just as effective. Lehrer found his voice with a half an hour to go, but he let Romney get away with a number of significant distortions and omissions.

Or as NY Mag put it in their amusing roundup, the "Most Amazing Scientific Breakthrough" of the night was how Lehrer "introduced the debate and then made himself completely invisible for the next 90 minutes." Romney certainly liked him! He's going to put him out of a job, but he likes him. "I'm going to stop the subsidy to PBS," Romney declared during the night's solitary fun moment. "I'm going to stop other things. I like PBS. I love Big Bird. I actually like you, too. But I'm not going to — I'm not going to keep on spending money on things to borrow money from China to pay for it." 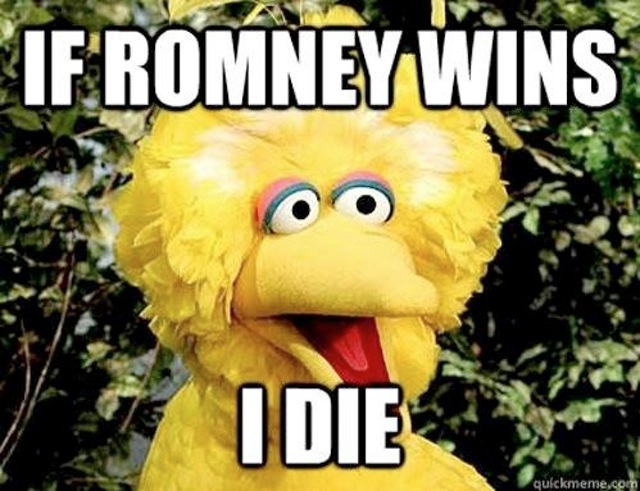 That's really gonna cost Romney with 5-and-under voters. It's going to be interesting to see what impact all this has in the polls. A Democtractic polling firm Greenberg Quinlan Rosner tells the Times, "The dial testing and follow-up discussions showed Mitt Romney performing well, improving his personal appeal and a number of important attributes. Obama also impressed the group, but not to the same degree as Romney. However, the research does not suggest that Romney fundamentally changed the political calculus in this election."

The next debate, on October 11th, should be a hoot, when Vice President Joe Biden and Congressman Paul Ryan debate foreign and domestic policy. Romney and Obama square off next on October 16th in a debate with a town meeting format. The third and final debate is on foreign policy on October 22nd. Maybe the Leader of the Free World will decide to make an appearance!

#barack obama
#election 2012
#mitt romney
#politics
#presidential debate
Do you know the scoop? Comment below or Send us a Tip