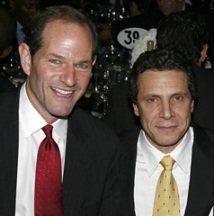 It's an Albany power play! During a State Senate meeting about the whole Troopergate mess, it turns out the state inspector general could have given Attorney General Cuomo the power to subpoena Spitzer aides, but didn't. The State Inspector General's office had been conducting its own investigation into the various allegations about the state police being used to discredit State Majority leader Joseph Bruno, but ended it, because the inspector general reports to Spitzer's chief of staff - a conflict of interest.

Cuomo's aides say that if the AG's office had subpoena power, they would have used it to question aides (including Spitzer chief of staff Richard Baum), but instead, the aides refused to answer questions and only offered prepared statements. Cuomo aide Steven Cohen said, "Certainly, having subpoena power would have been useful. In fact, I can’t imagine there being an investigation where the prosecutor or investigator wouldn’t benefit from the use of the subpoena.” Cohen added that the AG's office should have subpoena power to investigate cases of public integrity added to its "arsenal."

State Senate Republicans took the opportunity to accuse the state inspector general's office of not actually conducting an investigation. The Albany County District Attorney's office is currently investigating the matter.