Death of a Urinator 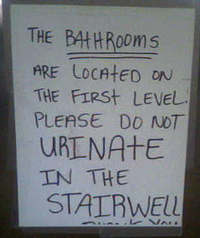 Three men are under arrest today after a fourth man was found dead at the foot of a stairway in a Harlem building. 1010 WINS reports that when police responded to a call regarding a trespasser, they found a man hog-tied, unconscious and unresponsive. He was declared dead at the scene by emergency service workers.The dead man was identified as 33-year-old Shamod Murray. He was allegedly caught relieving himself in a hallway at 341 Lenox Ave. by the building's superintendent. The super, Roger MacFarland, was with two brothers, Dean and Stephan Fuller. All three men have been arraigned after a night of questioning.

According to WCBS News, police found Murray, who was from Brooklyn, bound and crime scene investigators were removing a spool of heavy copper wiring and wire cutters as evidence. A 911 call was made around 8 p.m. Friday reporting a trespasser at the building. Police believe that the call was made after Mr. Murray's discovery and before his death. The cause of Murray's death has not been determined yet.