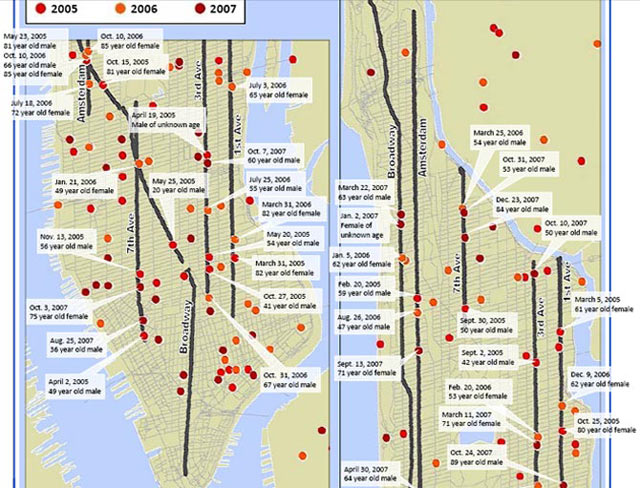 Third Avenue and Broadway in Manhattan are the deadliest streets for pedestrians in NYC, according to an analysis released today by the Tri-State Transportation Campaign, a policy watchdog group. The study found that between 2005 and 2007, ten pedestrians were killed by cars on Third Avenue and another ten died on Broadway. There were 128 pedestrians killed in all of Manhattan between 2005 and 2007, 147 killed on Brooklyn streets during the same time period, 53 in the Bronx and 26 on Staten Island.

The notoriously dangerous Queens Boulevard, where 72 pedestrians lost their lives in accidents between 1993 to 2001, has actually become safer, the study found, possibly thanks to improvements implemented in 2004. There were zero pedestrian fatalities reported on Queens Boulevard last year, down from three in 2006 and two in 2005. A total of 95 pedestrians were killed in Queens during the three years surveyed.

The analysis comes after a particularly dangerous weekend for pedestrians in New York. Two pedestrians and a man in a wheelchair, all over 60-years-old, were hit by motor vehicles in Manhattan, Brooklyn and Queens on Friday. Two died and one is in critical condition. And on Saturday an SUV bearing a Haitian senator crashed into the glass patio of an Indian restaurant on the Upper West Side. Streetsblog has urged transportation officials to follow Sweden's lead with that country's "Zero Vision" strategy, in which streets are engineered to make traffic fatalities impossible, most often through designing lower speeds into the roadbed. [Via City Room.]