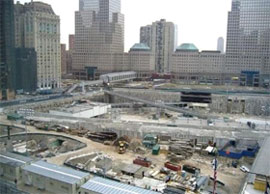 What brings absentee parents out of the woodwork? Promise of a dead child's money, it seems. Yesterday, the Daily News reported that Elsie Goss-Caldwell would be filing a petition to prevent her ex-husband from any money awarded after their son died on September 11. Goss-Caldwell says that her ex, Leon Caldwell, hadn't been in contact with their son for 28 years and doesn't deserve any of the money: "This is not about money, this is about respect for my son. How dare you try to profit from this? How dare you disrespect him?"

Kenneth Caldwell had been working at Alliance Consulting on the 102nd floor of the North Tower, and the Victims Compensation Fund gave Goss-Caldwell $2.9 million. Father Leon Caldwell, who the News says divorced Goss-Caldwell in 1979 and last saw her in 1984, reappeared in 2004, to collect $50,000 in workers comp from his son's death. Back then, an appeals court found that Leon Caldwell "met the legal definition of a parent" and was able to collect half, but had to use much of it to pay back Goss-Caldwell for child support.

Goss-Caldwell's current lawyer said, "This is a craven and disgraceful attempt to profit from the death of his son whom he abandoned at age 2." The $2.9 million has been in escrow, and the two parties will be meeting in Brooklyn court today.