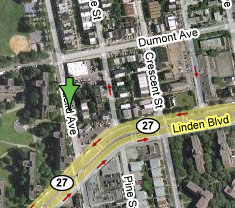 The FDNY was fighting a fire in a Cypress Hills apartment building when they found a dead woman. The authorities believe the 37-year-old was shot by her boyfriend and then set on fire, but the ME's office will determine the cause of death.

The woman's body was found on the 6th floor. WABC 7 reports that a man was seen running out of the building at 10:30PM, "looking like 'a human torch.'" Apparently that man was the woman's boyfriend, and he is suspected of killing his girlfriend. Neighbors "told him to stop, drop and roll," but one said, "He was desperate to get back into the building."

The boyfriend and the woman's son suffered burns and are in critical condition at hospitals. The fire in the 8-story building was under control after 15 minutes, around 10:45PM. No other injuries were reported.