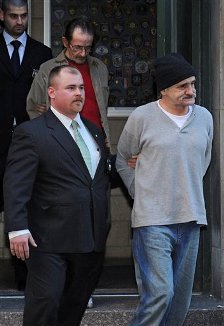 The desperate antics of old-school Hell's Kitchen residents are still making news. James O'Hare and David Daloia were arraigned for forgery, petty larceny and other charges when they tried to cash in O'Hare's roommate's Social Security check - while O'Hare's dead roommate's body was in a chair outside the checking cashing place.

Police believe dead roommate, Virgilio Cintron, died of natural causes on Monday, the day before O'Hare and Dalaia tried to pull the scam. A friend called Cintron "a hustler. He made money whichever way he could," and police say Cintron did have a lengthy rap sheet. Nicknamed "The Fox," Cintron had suffered from Parkinson's and O'Hare cared for him. Cintron's sister even said, "Some days he couldn't walk so good, and Jimmy would take him to the check-cashing place. Maybe he was alive and died on his way."

Well, Cintron looked dead to passers-by and a police detective who noticed O'Hare and Daloia pushing the body from O'Hare's apartment to the Pay-O-Matic on 52nd Street and 9th Avenue. Detective Travis Rapp said, "At first I thought it was a mannequin, a dummy," but then noticed the body was stiff and pale. When he confronted the pair, they claimed Cintron was still alive. From the Daily News:

An ambulance arrived and the paramedics reported the figure in the chair had been dead for a good 12 hours.

"Oh, my God! My friend is gone!" said the other man, Daloia.

O'Hare and Daloia yelled at reporters, when being taken the police precinct, "Get your facts straights!" and "We didn't do anything!" Their friend who knew Cintron as well thinks that Cintron is "probably laughing" about the scheme and would have wanted them to have the money.

The men are being held on $3,000 bond/$1,000 cash bail. The NY Times is reporting that Cintron's sister actually worked at the check cashing store the men went to; also, one of the charges was for failure to bury a dead body in a reasonable amount of time.

Photograph of O'Hare, background, and Daloia, foreground, being taken from the stationhouse by Louis Lanzano/AP