A group of affordable housing advocates and unions that have spent the last year vehemently protesting Mayor de Blasio's $41 billion affordable housing plan—arguing that it would not create enough truly affordable housing and hinges on non-union labor—issued a surprise endorsement of the mayor's plan on Sunday. The announcement came less than a week after Real Affordability For All coalition (RAFA) threatened, then postponed, acts of civil disobedience at City Hall citing "productive movement in current negotiations" with the City.

One of the pillars of Mayor de Blasio's affordable housing plan, known as mandatory inclusionary zoning, would allow developers to build taller, denser buildings in fifteen targeted low-income neighborhoods—from East New York to Jerome Avenue in the Bronx—so long as 25-30% of the apartments rent for less than market rate.

RAFA, among the most vocal critics of de Blasio's plan, had argued that the rezoning would produce a glut of new apartments too expensive for long-time residents of these neighborhoods. For example, only 13% of the apartments planned for East New York would be affordable to the 53% of current residents who make less than $35,000 a year.

According to RAFA, they threw their support behind the mayor after he agreed to conduct a study of the neighborhoods slated for rezoning.

"We know Mayor de Blasio shares our core progressive values, and he has listened to our concerns," said RAFA Director Maritza Silva-Farrell in a statement issued Sunday. "That's why we support this stronger, more robust affordable housing plan, along with the administration's commitment to do a study that will examine mechanisms for achieving even deeper affordability and job standards in new housing."

De Blasio's plan has been formally rejected by 50 of 59 impacted community boards, and four of the five borough presidents. Asked if she believed RAFA's endorsement would reverse that opposition, Silva-Farrell said, "I think things will change once we have a program in place to think about rezoning differently."

RAFA says the Mayor initially resisted the study, but "reversed his position" after RAFA "pushed" him. The study won't be conducted until after the mayor's plan is passed.

Wiley Norvell, a spokesman for the mayor, says the vaguely-defined study will "identify even more tools to reach New Yorkers with quality jobs and affordable housing." 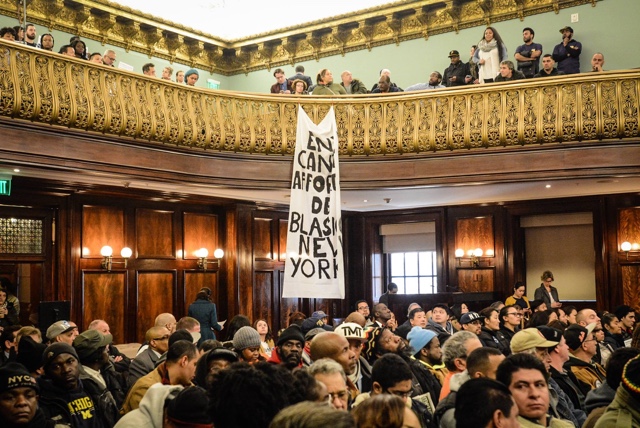 More substantive changes to the zoning laws appear to be coming from the City Council and Brooklyn councilmember and Housing Committee Chair Jumaane Williams.

Politico New York reported today that amendments to the mayor's plan favored by the City Council would create a deeper level of affordability in the zoning scheme.

One amendment would set aside one fifth of new apartments to tenants making 40% of the AMI, or $31,075 for a family of three. Another would require that in buildings where 25% of units must be affordable for those making 60% of the AMI, 10% of all units would have to go to residents who make only 40%.

"We want to make sure that there aren't parts of this city that are built with no deeply affordable units," Williams told Gotham Gazette. "There shouldn't be a project where some of the units aren't of the deepest affordability—30 percent or below of AMI must be considered." Silva-Farrell was careful to reiterate on Monday that RAFA and Williams are working together.

The rezoning changes could be approved as soon as this afternoon.

"We're on the verge of implementing the strongest, most progressive requirement for affordable housing of any city in the country," mayoral spokesman Wiley Norvell said in a statement.

The new amendments are not as strong as what RAFA was fighting for: 50% of housing to be affordable for people at or below the neighborhood median income, rather than the metropolitan area median income. The Mayor's office has not agreed to this proposal, nor have they agreed to use local construction workers and pay them a prevailing wage, which RAFA had also argued for [PDF].

At a press conference on Monday, Mayor de Blasio fielded questions from reporters on the nature of the study, and whether the City's agreement to conduct such a study ultimately won RAFA's endorsement.

In his response, the Mayor suggested that RAFA was more swayed by his own vision, than by the promise of a study.

"It's fair to say that sometimes when people get to know a plan better, they see more to like about it," de Blasio said. "I don't want to speak for RAFA, but I believe they realized the extent of our plan. We want to get to a good plan with the council, and then get back to work looking at what more we can do."

Silva-Farrell reiterated her confidence in RAFA's endorsement on Monday.

"The thing that makes me confident is that we're going to be able to have a working group with our coalition in City Hall," she said. "Now it's not so much can we do it [make the affordability deeper], the study is going to be about how we do it."