De Blasio's Streetcar Proposal Is A Shiny Waste Of Money

Mayor de Blasio’s $2.5 billion Brooklyn-Queens streetcar isn’t the worst transportation project in New York City (we have a $4 billion subway station), but it may be the most transparently unfair.

As an allocation of municipal resources, it would have made perfect fodder for de Blasio’s “Tale of Two Cities” campaign. It is a glittering bauble for waterfront developers in a city where residents—most of them much further from Manhattan—endure the longest commutes in the nation.

The first question with any transit project should be: Who will ride it? The coalition of real estate interests who proposed the streetcar envision its ridership reaching 15.8 million trips per year by 2035. Their most optimistic prediction, then, is that this streetcar will have as many riders in two decades as the bus routes on Fordham Road and Utica Avenue have today.

If you add up all the weekday ridership of the seven Brooklyn-Queens waterfront buses running today, which together cover a good deal of land beyond the streetcar route, the total would barely crack the top ten city buses.

Per mile of route, the project makes for an even worse comparison: The Fordham Road and Utica buses are twice as busy today as the proposed streetcar could be in twenty years.

Forget the comparisons for a moment. Another problem with the route is the route itself. It doesn’t connect to the L train and comes nowhere near the J/M/Z station at Marcy Avenue. For riders from Red Hook or the Navy Yard area, the proposed Downtown Brooklyn branch will be a less convenient link to the subway than current bus connections.

And there are some major administrative problems. Because it is envisioned as a city project, the streetcar would offer no transfer to MTA buses and subways. It's unclear if the streetcar will have a dedicated right-of-way, which would be a political nightmare to implement. Without one, it will be slower than a bus in traffic.

For riders who want to travel long distances on the route, it will be very slow indeed. Boosters estimated the trip from Dumbo to Greenpoint would take 27 minutes. That’s not even a ten-minute improvement over the existing, circuitous subway route. The longer your trip, the worse the streetcar will measure up. And it’s not even clear that there’s anyone who wants to ride between Astoria and Dumbo or Red Hook and Long Island City on a regular basis. The MTA released a group of priority Brooklyn transit routes in 2009, and this wasn’t one of them.

For those who do want such an option—physically and administratively disconnected from subways—there’s a ferry coming your way. At least the boats won’t get stuck in traffic. 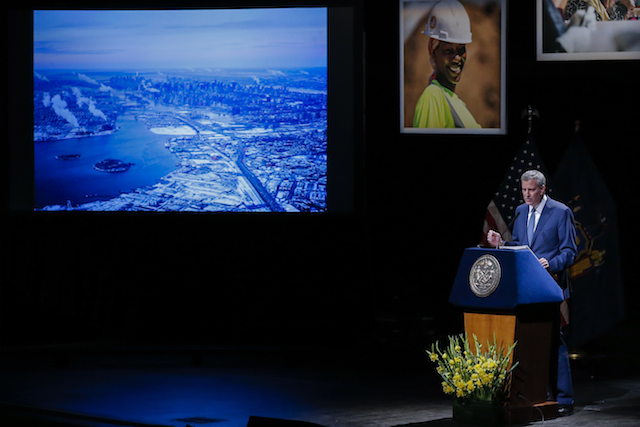 To the extent this streetcar boosts property values and induces waterfront development that would not have otherwise occurred, it could generate some of its own funding. But Sunset Park, Red Hook, Cobble Hill, Dumbo, North Williamsburg, Greenpoint, Long Island City and Astoria are already some of the hottest neighborhoods in New York City for new development.

Real estate investors hardly need any further incentive to build there—even without a streetcar, almost all those neighborhoods should grow to fill their zoning envelopes, and could grow more. These neighborhoods are also the site of the city’s fiercest NIMBY battles. A streetcar will not lessen Red Hook’s opposition to a nursing home, or Cobble Hill’s to residential towers at the Long Island College Hospital site. If you think it will convince waterfront communities to allow more, taller buildings, I've got a transportation improvement to Manhattan to sell you.

If the streetcar ran free from traffic, attracted the expected ridership, and produced a tremendous building boom on New York’s waterfront—raising property taxes so much that it paid for itself—it would be a worthy project. It would certainly be a better than several other regional proposals: The PATH extension to Newark, for example, or Governor Cuomo’s poorly considered plan to build an AirTrain to LaGuardia Airport.

Yet it’s likely New York City will end up paying, and the opportunity cost is large. With that kind of money, the city could vastly expand and improve its Select Bus Service routes, which serve hundreds of thousands of daily commuters. And why shouldn’t straphangers on the city’s busiest bus routes deserve the dignity of rail? As Ben Fried writes on Streetsblog, there are seven distinct areas of Brooklyn and Queens with higher population densities than San Francisco that are more than a half-mile (and sometimes much further) from a subway. The East River waterfront isn’t among them.

It feels petty to decry a transit project on the grounds that there is still so much else to do. That perfectionism can be reductive, because flawed projects are often better than no project at all. But that shouldn’t be the choice we have to make, because there are better ideas out there—and hundreds of thousands of desperate commuters, none of them hypothetical or projected, that could use the help.

The streetcar will sap de Blasio’s financial and political strength to support a Utica Avenue subway extension. And it all but precludes the possibility of him pushing for a far more worthy, and more equitable, Brooklyn-Queens transit project: the Tri-Borough RX. The tracks are there. The riders are there. The subway connections are there.

And nobody along its route, which arcs from the Brooklyn Army Terminal through Brooklyn College, Broadway Junction, Ridgewood, and Jackson Heights, will be taking a ferry to work anytime soon.

Henry Grabar is a writer in New York. You can read more of his work here.

#ask DC how they like their streetcar
#streetcar
#triborough RX
#you can literally hear Bad Company's greatest hits coming from Cuomo's garage this weekend
#longform
#original
Do you know the scoop? Comment below or Send us a Tip