Yesterday Mayor de Blasio announced a package of proposals intended to make the 421-a tax-break program create more affordable housing, along with a “mansion tax” on residences that sell for more than $1.75 million. The ideas are certainly an improvement on the status quo, but they’re unlikely to live up to the mayor’s claim that they will make “sure the same pressures that have pushed New Yorkers out of their neighborhoods are harnessed to build the next generation of affordable housing,” because they don’t fundamentally change the model of relying on trickle-down from luxury development to create lower-cost housing.

Two proposed changes in the 421-a law—which expires on June 15th and must be renewed by the state legislature—would increase the amount of below-market housing which developers receiving the subsidies would have to build. The first would require all buildings receiving the tax break to include “affordable” housing, not just those in areas like Manhattan and the gentrified Brooklyn-Queens waterfront. The second would increase the share of below-market apartments required, from 20 percent to between 25 and 30 percent.

Both would be improvements, but fairly small ones given the need. The Mayor’s Office said in a statement that the changes would “double” the number of affordable apartments produced by 421-a, “from 12,400 to more than 25,000 over the coming decade.”

Last year, the administration estimated that the city needed 550,000 new apartments to house people who couldn’t afford to pay more than $1,050 a month rent, and the number of homeless people in city shelters reached 60,000 this winter.

A third change would extend the length of time apartments getting the subsidies would have to stay affordable to 35 years, up from the current 20 to 25. The issue here is that the city would still be giving out more than $1 billion a year in tax breaks to get apartments that wouldn’t be permanently affordable, where the rents will still eventually skyrocket.

A fourth change would lower the rents in the “affordable” housing that's built with the subsidy. Currently, the Mayor’s Office said, what’s built through the 421-a program “primarily serves a very narrow slice of the population—only those making approximately $46,600 per year.” The city would like that changed “to reach New York families making as little as $31,000 per year on up to vital segments of the city’s workforce like teachers, nurses, and police officers.”

The problem here is that close to one-third of the city’s residents make less than $31,000. Even if the minimum wage were raised to $15 an hour, it would still fall short of that mark.

It would be uncharitable to say that the de Blasio administration is clueless about what low-wage workers’ lives are like. It may be more likely that the administration has conceded that it’s hopelessly impractical to build housing that cheap using the trickle-down model.

In an email, Wiley Norvell, a spokesman for the mayor, insists that "there is nothing small or marginal about these changes. This is all about harnessing the heat of New York City’s housing market and putting it to work for the public good." 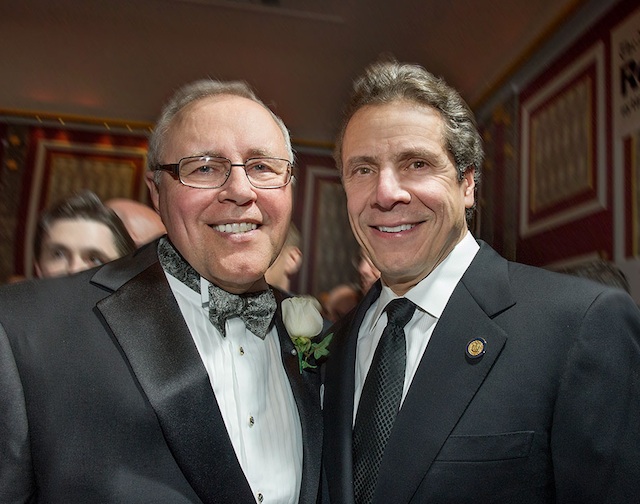 The mayor's “mansion tax” is a more ambitious idea. It would levy a 1% tax on residential property sales over $1.75 million—apartments, condos, and houses of up to three families—with an additional 1.5% on the amount over $5 million.  The Mayor's Office projects this would raise $180 to $200 million per year, enough to build “37,000 affordable apartments over the next decade” (assuming a price of less than $55,000 per unit).

All these initiatives would have to be enacted by the state legislature. Would the Republican-majority State Senate ever levy an extra tax on multimillion-dollar apartments, even if the indicted Dean Skelos steps down as leader? Gov. Andrew Cuomo, who has taken more than $1 million in contributions from billionaire luxury-housing developer Leonard Litwin (“Developer No. 1” in the Skelos indictment), has said he’s inclined to have both 421-a and the state’s rent-stabilization laws renewed as is, without any changes such as increasing the amount of affordable housing required or repealing vacancy decontrol.

Up4NYC, a lobbying coalition of building-trade unions and contractors, criticized the mayor's plan on the grounds that it wouldn’t require developers to pay union-scale wages.

“The mayor’s plan will not provide middle-class wages to the workers employed on what will remain mostly taxpayer-subsidized luxury housing, and it will not significantly increase affordable housing production for New Yorkers who need it most,” Pat Purcell, head of the Greater NY Laborers-Employers Cooperation & Education Trust, said in a statement.

On the other hand, Stephen Spinola, president of the Real Estate Board of New York, a lobbying and trade group affiliated with the city’s big developers, praised the mayor’s plan as “ambitious, yet practical,” saying in the de Blasio press release that it will “result in the creation of much more affordable and market-rate, multifamily rental housing in New York City.”

Trickle-down affordable housing does work for some people.

Steven Wishnia is a New York-based journalist and musician, and the editor of Tenant/Inquilino. He is also the author of "When the Drumming Stops," "Exit 25 Utopia," and "The Cannabis Companion." His previous work for Gothamist includes "Why The Push To Abolish Rent Control Is Stupid And Irresponsible" and "How NYC Can Solve Its Affordable Housing Crisis"

#421-a
#affordable housing crisis
#mansion tax
#real estate lobby
#REBNY
#original
Do you know the scoop? Comment below or Send us a Tip