"It is a true mixed income plan," Torres-Springer told reporters. "Of course we need to meet the needs of families who are really struggling to get by in NYC.... But this also has to be a plan for other families in New York. Middle-income families who in too many instances are being driven out of the city due to rising costs."

According to City Hall, the administration has created or preserved a combined 77,651 units of affordable housing since the plan's launch in 2014, on track and budget to reach the 2024 goal of 200,000 units. During the fiscal year ending in June, the city created more units for poor New Yorkers than it did in the two years previous.

By the numbers. (via Mayor's Office)

"The good news is that because of a lot of pressure from advocates they have included more deeply affordable units," said Judith Goldiner, attorney-in-charge at the Law Reform Unit of The Legal Aid Society. "That's great. The bad part is that they are still devoting numbers to people who don't really need it as much."

Advocates have long argued that City Hall's benchmarks for affordability, recently deepened with an additional $2 billion investment set to kick in next year, represent too little too late. Before Mayor de Blasio's housing plan was implemented, the city was short 550,000 affordable apartments for families that make less than $42,000 per year. Meanwhile, NYC's population is booming. The supply and demand imbalance is obvious every time a new lottery opens. And thanks to loopholes in the existing rent laws, the Alliance for Tenant Power estimates that the city could lose 100,000 affordable units by 2019.

On the neighborhood level, New Yorkers have pushed back hard against residential rezonings that fit squarely into the mayor's philosophy of providing subsidies to for-profit developers in exchange for a percentage of below-market rate units. For example, a plan to develop the Bedford-Union Armory in Crown Heights calls for 56 condominiums in exchange for 330 rental apartments and a recreational center. Of those apartments, 67 are set aside for households that make less than $38,835 per year.

On Thursday, Deputy Mayor Alicia Glen defended the project, telling reporters that BFC Partners, the selected developer for this project, is "required to do an enormous amount of affordable housing, and provide a recreational facility in a neighborhood that is starved for one."

Ismene Speliotis, Executive Director of the Mutual Housing Association of New York, a nonprofit housing developer, countered that the BFC plan is "a lost opportunity to provide permanent affordability for the lowest income New Yorkers who are most at risk." 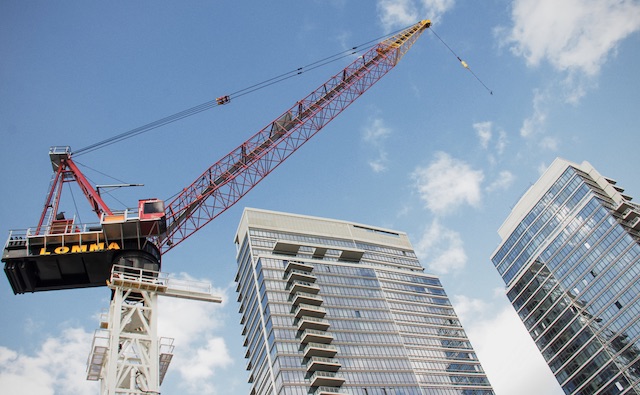 In 2016 alone, according to the Rent Guidelines Board, roughly 7,500 rent stabilized units were turned into market rate apartments. These numbers aren't reflected in the affordable housing gains de Blasio celebrates. Fighting deregulation is "a parallel effort and a crucial part of the overall housing agenda, but that is not Housing New York," Glen explained.

Glen added that the city is "fighting tooth and nail to save and invest in" New York City's existing public housing, while continuing to work closely with private developers to "put together the best deals you can do" and "leverage every single dime of private sector money."

Goldiner, the Legal Aid Society attorney, challenged City Hall to be more aggressive in helping NYC's record number of homeless families. To date, de Blasio's plan has secured 6,533 apartments for this demographic, plus 550 of a promised 15,000 units of supportive housing for homeless New Yorkers with specific health needs. The city could invest more in NYCHA units, she said, which are currently excluded from the city's Housing New York preservation efforts. "If we don't preserve these units, we are going to lose them."

City Hall pointed out that de Blasio announced $1 billion in NYCHA roof replacements over the next decade, among other capital investments.

The number of below-market-rate apartments currently inhabited is a fraction of Mayor de Blasio's headline 77,651 total. While the majority of "preserved" apartments, or units that have been rehabbed in exchange for affordable rents, are occupied, only 4,145 of 25,342 new apartments have been completed to date. Construction and financing takes years.

Affordability is also ephemeral. The majority of units preserved and created under the mayor's plan are under temporary regulatory agreements. City Hall could not confirm the average length of the agreements, but said the minimum is two decades.

Goldiner urged City Hall to work more creatively with Section 8 holders to help families navigate a biased and brutal housing market in the short term, while they wait for new housing to come online.

When it comes to vouchers, "You can't just say, 'Here you go, just go out in the market.'"

#affordable housing
#mayor de blasio
#MIH
#original
Do you know the scoop? Comment below or Send us a Tip