De Blasio: We're Not A City Of Wimps But 'This Is An Unusually Fast, Intense Storm'

Mayor Bill de Blasio held a press conference at the NYC Emergency Management offices in Brooklyn this morning to update the city on the snow situation, kicking things off by noting the oddness of the drastic shift in weather in less than 24 hours—it's "something like we've never seen."

"This is an unusually fast, intense storm," de Blasio declared, noting that earlier we got 3" of snow an hour, for two hours in a row, which is a rare rate of snowfall. The snow will slow down between noon and 1 p.m., and the hope is that it will stop by 6 p.m. If that is the case, "I'm feeling good about tomorrow morning's rush hour," he said, and that most likely school will be open, and the city will be back to normal by morning. 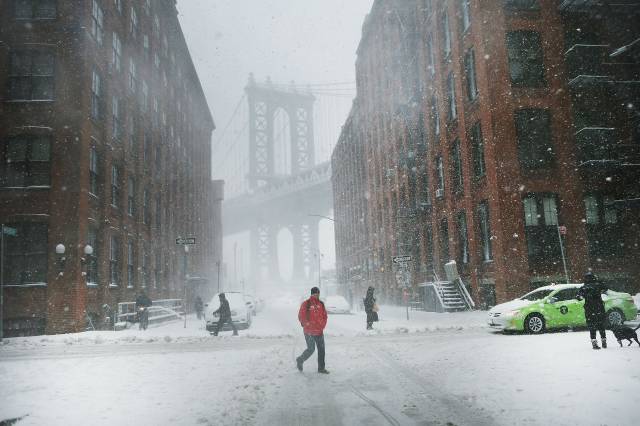 Earlier this morning in DUMBO. (Getty)

De Blasio and DSNY Commissioner Kathryn Garcia urged everyone to stay off the streets so the 2,300 sanitation vehicles can keep clearing the snow. When a reporter on hand questioned this urging of New Yorkers to stay inside, asking when we became "a city of wimps," de Blasio replied, "When you're talking about a super concentrated snow storm, it is just plain common sense to not go out if you don't have to. It is not a moral judgement, it is not that we've changed who we are, this is one of the toughest cities on earth..."

"Willie, Willie, Willie...."
(Mayor de Blasio responding to @willieneuman re: when we became a "city of wimps.")

As for today: you're not going to have a lot of luck flying, or crossing certain bridges (the upper level of the Verrazano Bridge has been closed), and you know what: maybe skip the subway, too. So far today there have been delays on the 1, 2, 3, 5, L, J, N and W lines, and buses are running very sl...ow...ly.

#dsny
#mayor de blasio
#snow
#original
Do you know the scoop? Comment below or Send us a Tip
A new Gothamist is coming! We’ve moved comments over to our beta site. Click here to join the conversation and get a preview of our new website.