Back in March, after Dorothy Bruns drove through a red light on 9th Street in Park Slope, killing two children and an unborn baby, community members and transit advocates angrily confronted Mayor Bill de Blasio over the notoriously dangerous intersection. While mourning the loss of the young children—4-year-old Abigail Blumenstein and 1-year-old Joshua Lew, as well as the unborn child of Ruthie Ann Miles—they also noted that the street has seen several other tragic incidents in recent years, including the death of a pedestrian and near-death of a cyclist in 2016.

Days later, the DOT promised that they'd move quickly to bring protected bike lanes and other safety improvements to the bustling two-lane corridor.

On Wednesday, that 9th Street plan was finally unveiled, during a press conference held by de Blasio, DOT Commissioner Polly Trottenberg, and other local officials at the intersection.

The proposed redesign includes about a mile of protected bike lanes on both sides of the street between Prospect Park West and Third Avenue, as well as shorter crossings and slow-turn treatments at intersections. The plan, which will be shown to the local community board next month, would also expand pedestrian access and modify loading regulations with the goal of reducing double parking. 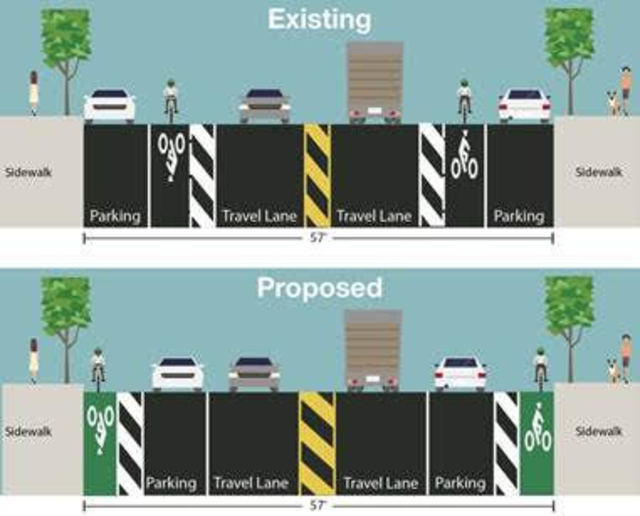 The DOT's plan for 9th Street

The mayor and other elected officials also used the opportunity to call on lawmakers in Albany to renew and expand the city's speed camera program, which will expire at the end of next month if no action is taken. While there are several proposals on the table, it's unclear whether the state legislature will approve an extension by the July 1st deadline.

"Hundreds of thousands of children will be in danger if this legislation expires," the mayor said on Wednesday, while echoing his calls for the legislature to approve the installation of speed cameras at an additional 150 school zones and to revise the program to allow cameras on streets adjacent to schools. "Albany should go farther—why wouldn't we want to protect more people."

In the 140 school zones where the cameras have been installed, speeds have gone down by 63 percent, and pedestrian injuries have fallen 23 percent, according to the city. Yet some opponents of the plan continue to claim that the program is intended to fill the city's coffers. The Times reports that between 2014 and 2016, $122 million in violations were logged by the cameras, which are only active during school hours. State Senator Simcha Felder, meanwhile, has demanded that armed police be placed in schools in exchange for the speed cameras.

"If Albany can't get it together to renew legislation that we have proof saves kids lives, then that is a truly broken and dysfunctional place," Council Member Brad Lander said on Wednesday. "We know we can't bring Abigail, Joshua, and Sophia back to their families, but by making our streets safer, confronting reckless driving, and preventing future deaths, we will do all we possibly can to make their memory into a blessing."