De Blasio: Turnstile Jumping Is 'Not An Economic Issue' For NYers Who Get Arrested

Overall crime, police stops, and arrests for petty offenses have all fallen during Mayor Bill de Blasio’s first term. But the mayor still believes that jumping a subway turnstile should be a criminal offense, because in his words, “the typical person who is arrested turnstile jumping has money on them.”

“They have money on them, so it’s not an economic issue from everything we can see,” the mayor told civil rights activist and podcaster DeRay Mckesson on Monday.

“And then sometimes, not typically, but too many times there is a weapon involved too, and that’s important because we need that weapon off the street for the good of everybody in New York City.”

Deb Lolai, a criminal defense attorney who works for the Bronx Defenders, says she was “quite surprised” by the mayor’s assertion that New Yorkers who are arrested for turnstile jumping are well-off enough to afford a fare.

“Even if they’re arrested with some cash on them, it doesn’t mean they can afford a three dollar MetroCard,” Lolai said. “All of our clients are indigent, many of them are trying to survive day by day. If they have five dollars on them, they need to choose between spending that five dollars on a meal, or a MetroCard, or food for their children, or diapers, or formula. So making a claim that just because people are arrested with cash on them they can afford a three dollar ride and are jumping the turnstile regardless, is just a false statement.”

Theft of services, which carries a $100 fine per offense, is one of the most common charges in New York City—8,625 people have been arrested for the offense in 2017 so far, and nearly 90 percent of them are people of color. Roughly three times as many are issued a summons and are not taken into custody.

The Bronx Defenders handled 2,249 cases of fare beating in the 2017 fiscal year, which ended on June 30th. Fewer than one percent of those cases involved a weapons charge, according to Craig Levine, the Bronx Defenders’ director of public policy.

“It’s the age old Broken Windows rhetoric: we must go after low-level stuff because frequently the alleged perpetrators of low-level stuff are often revealed to be high level perpetrators, and are in possession of illegal weapons,” Levine says. “It seems to us demonstrably false.” 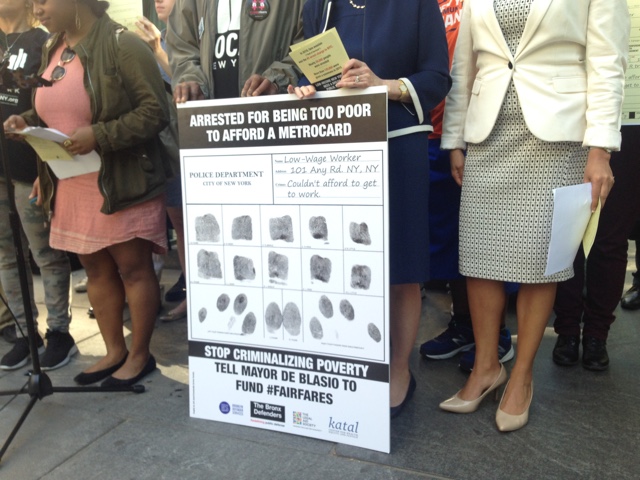 A sign at a rally for Fair Fares this past May. (Emma Whitford / Gothamist)

During the interview, the mayor was asked about the difference between his current “community policing” initiative, and Broken Windows policing that gained fame in the mid 1990s, given that both strategies rely on cracking down on low-level crime and both were designed by former NYPD Commissioner Bill Bratton.

"I think Broken Windows policing got a bad name in part because it was associated with the Giuliani administration and there are a lot of reasons to be highly critical of the Giuliani administration,” the mayor said. “But I think the underlying principle was the right principle, which is you address little things before they turn into big things. You respond to quality of life concerns that come from the community."

The mayor also pointed out that NYPD officers have “the right to choose the most minimal approach” and issue a summons, and added that “warnings are a perfectly legitimate form of policing, it’s literally a tool that’s being underutilized.”

“If you are a first arrest, or don’t have any outstanding warrants, have your ID, then more likely than not you’ll get a summons. But that discretion typically won’t be applied to people who are down and out, who have been in and out of jail. Those people I don’t think will benefit from a summons.”

Rountree said he believed that turnstile arrests “target these populations simply because they don’t have the money to pay. For [police], it’s low-hanging fruit.”

For her PhD thesis, Baruch College professor Alexis Perrotta performed a qualitative study on low-income New Yorkers who used mass transit, and found that “low-income riders are more likely to evade the fare, exploit free transfers, and rely on fragmented systems of generosity and welfare than to forego goods.”

Perrotta quotes one of her subjects at length:

There’s been times that I’ve had to ask him [her child’s father from whom she fled to a domestic violence shelter] for like a $5 or $10 little advance or whatever so he would give that to me so I can get my child to school. Or sometimes I’ve risked jumping on the back of the bus and I do not—gosh I dread the day I would get caught for that cause it’s so silly, but I mean I only do it—I’ve only done it if it was something that I’m trying to get my daughter to school. It’s not like I was just jumping on there for the fun of it.

Lolai, the Bronx public defender, said she recalled one client, a 16 year old boy with a developmental disability, who did not have any guardians taking care of him.

“He had a case for jumping the turnstile in almost every single borough. It kept happening because he couldn’t fully understand the consequences, but also he literally didn’t have any money or any means of transportation, this was what made sense to him.”

Lolai added, “I’m thinking of so many clients who are living on the street for them to get anywhere in the city they’re going to have to jump turnstiles.”

Manhattan DA Cy Vance Jr. recently announced that he would create a diversion program for those arrested for the crime, and acting Brooklyn DA Eric Gonzalez said a similar plan is in the works for his borough. Assemblywoman Tremaine Wright and State Senator Jesse Hamilton, both from Brooklyn, announced plans to introduce state legislation that would make the offense a civil, not a criminal penalty. The Fair Fares initiative, advocated by the Community Service Society and the Riders Alliance, would provide half-price MetroCards for the poorest New Yorkers.

In the interview, the mayor said that his newfound support for Fair Fares—paid for by a state-levied tax on the rich—would go towards addressing the “core disparities in society,” but warned that imposing civil, instead of criminal penalties on fare beating would create chaos.

“If you recognize there’s a lot of people who do it a lot, who don’t necessarily have to do it ‘cause economics, the problem is if you send an incessant message that we’re gonna loosen it up and loosen it up, then more and more people are gonna do it,” the mayor said. “I don’t think its a good message to the whole society that some people are gonna jump the turnstiles everyone else is paying their fare, I don’t think that’s good for the social fabric, if you will.”

Rountree, who himself said he was unsure about decriminalizing fare beating, also urged caution.

“I think we all have to be careful how to categorize people. In a city as rich as New York, there are pockets of devastating poverty and people in desperate situations, and we can’t always say that people are looking for an opportunity to get over or game the system just because they can."