Mayor Bill de Blasio will announce today that the minimum wage of city workers will go up to $15 per hour. Officials tell the NY Times that the new minimum wage will be among the highest of its kind in America.

De Blasio, a vocal supporter of the "Fight for $15" movement, will make the announcement this afternoon, at the offices of District Council 37, NYC's largest public employee union. Its website states, "Our members care for the sick, the children, the elderly. We maintain bridges, parks, roads and subways. We staff the hospitals, schools, libraries, social service centers and city colleges. We do the clerical work, the maintenance work, the technical work that keeps this city running. Our state members uphold rent regulations and serve as interpreters and reporters in the courts. Some of us wear uniforms, some of us wear hard hats, some of us use computers or calculators."

The wage will be phased in by 2018. School crossing guards, pre-K teachers, and many seasonal workers will see their hourly wages increase significantly.

The majority of the city’s 300,000 employees already earn $15 an hour or more, officials said. Mr. de Blasio’s plan would affect about 20,000 unionized workers, mostly represented by District Council 37, and 30,000 employees of outside organizations — like day-care providers — whose services are paid for by the city.

The increase in wages is expected to cost an additional $238 million over the next five years, concerning some fiscal experts. “The mayor has been lucky so far with the economy,” said Nicole Gelinas of the Manhattan Institute. “If a recession comes, higher wages will have to mean more layoffs." 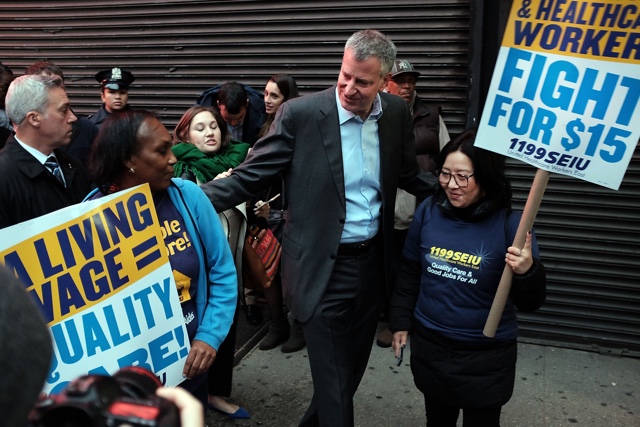 Hector Figueroa, president of the powerful union 32BJ, said, "When New York City fast food workers launched their fight for $15 three years ago they started a movement that swept through our city and our country. Mayor de Blasio stood on the picket line with the first strikers and now he's putting his steadfast support of fair pay in action with his plan to raise the minimum wage for city employees and city-contracted employees. 32BJ members know what a difference good pay makes and now more than 50,000 workers will see that difference for themselves. This is good for these workers and their families, good for their communities and good for our city."

In the past half year, Governor Cuomo has been slowly raising state workers' minimum wage to $15/hour, most recently raising SUNY workers' wages this week. The governor is reportedly feeling "pressure" to increase paid parental leave because of de Blasio's decision.

#city workers
#dc37
#fight for $15
#mayor de blasio
#minimum wage
#progressive
Do you know the scoop? Comment below or Send us a Tip