"We're literally adding 50 percent more to this plan and speeding it up, but using the same groundwork we've found works," the mayor said at a press conference announcing the move on Tuesday at East Flatbush's CAMBA Gardens II, a recently opened supportive housing complex adjacent to Kings County Hospital.

The de Blasio administration says it's planning to spend $150 million per year over the next four years to help meet the new goal, with new programs focused on seniors and vulnerable rent-regulated tenants.

Specifically, the expanded affordable housing plan includes more money for nonprofit developers to get help buying up buildings vulnerable to speculators—usually residential complexes of between 30 and 50 units in gentrifying neighborhoods such as Crown Heights and Bushwick, according to HPD Commissioner Maria Torres-Springer.

That aspect of this new program, dubbed Neighborhood Pillars, will be funded with $275 million, up from approximately $138 million previously earmarked for a similar purpose, HPD said, with the goal of preserving 7,500 units over eight years. The fund will also leverage "private financing and philanthropic contributions," Torres-Springer said, combining private and public money to cover mortgages and rehabilitation costs while keeping rents affordable.

"We don't want these speculators to win the day," the mayor said. "We want nonprofit organizations to be the ones that get these buildings. We know they'll take care of them right."

Katie Goldstein is director of Tenants and Neighbors and the Real Affordability for All Coalition, a group of grassroots housing organizations and construction unions that has been heavily critical of Deputy Mayor for Housing and Economic Development Alicia Glen's apparently close relationships with for-profit developers.

"I think overall this has been a recommendation of the RAFA coalition," Goldstein said, of Neighborhood Pillars. "But when you're talking to me about buildings that are 30 to 50 units, that's small and piecemeal compared to the major assets and public land that have been going to private developers." 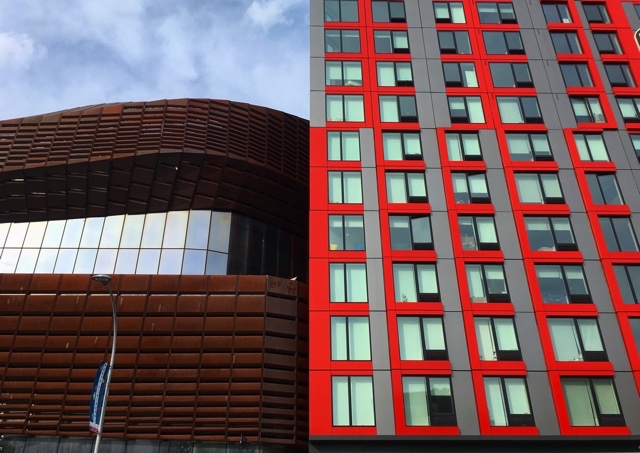 Reverend David K. Brawley works with East Brooklyn Congregations, a coalition that has helped nonprofit developers build thousands of low-income homes since the 1980s. His group is urging Mayor de Blasio to adopt a more aggressive plan focused on housing thousands of low-income seniors by building apartments on vacant NYCHA property and other vacant city lots.

"These are some steps in the right direction, but it's simply just not enough to turn the wave of displacement and eviction around," Brawley said of the mayor's announcement. "While the de Blasio administration focuses on preserving a few thousand homes at a time, hundreds of thousands mostly black and Latino New Yorkers are at risk of being evicted."

The goal of City Hall's upscaled housing plan is to stop what de Blasio described as "an affordability crisis that we could have never imagined."

The complex where the mayor spoke Tuesday is illustrative of the problem, and received 60,000 applications for just 110 units in the building, according to its director. Those numbers match similar statistics elsewhere in the city for the demand for apartments through the city's affordable housing lottery.

In addition to more funding, the expansion and acceleration of the de Blasio housing plan is made possible by several factors, according to Deputy Mayor Glen: the expectation-exceeding reach of the Mandatory Inclusionary Housing program, a zoning change that encourages private developers to build affordable units, and the 421a tax program for developers.

Cea Weaver is policy director for New York Communities for Change, a city-wide grassroots group that organizes against major for-profit development projects like the Bedford Union Armory in Crown Heights. She argued that while Neighborhood Pillars may prove helpful, Mayor de Blasio's affordable housing plan is also fueling the market nonprofit developers are struggling to compete in.

"I think the mayor is clearly responding to our criticism but it doesn't respond to the fact that there's a runaway housing market out there that's been aided and abetted by the fire sale of public lands to private developers," Weaver said. "And so it will be hard for not-for-profit developers to compete for preservation deals. It really just depends on acquisition prices and whether this bump will help them compete."

#affordable housing
#mayor de blasio
#preservation
#original
Do you know the scoop? Comment below or Send us a Tip