Mayor Bill de Blasio, who's repeatedly stated that briefly parking in a bike lane is no big deal, now says he'd like to see "consequences" for the livery driver who blocked an unprotected bike lane on Central Park West, forcing a 23-year-old cyclist into the deadly path of an allegedly drunk sanitation truck driver.

Asked about Madison Jane Lyden's killing during an NY1 appearance on Monday night, the mayor called the bike lane blockage a "reckless action" that "set everything else into motion." He said he was surprised that the driver did not receive a summons at the scene, adding "there's got to be consequences for this case for sure, in my opinion."

Lyden, an Australian tourist visiting New York, was biking uptown on Central Park West near W. 67th Street on Friday evening when she was forced out of the bike lane by the parked livery cab. After swerving to avoid the car, she was struck by sanitation driver Felipe Chairez, police said. The garbage truck driver, who later admitted to police that he'd had two beers, was arrested for DWI and operating a commercial vehicle while under the influence of alcohol. The livery driver, whose name has not been released, has not faced charges.

"One of the powerful things we've seen in the whole Vision Zero era is: Create a culture of consequence if you expect fundamental change, and that's what we're trying to do," the mayor added on Monday.

While de Blasio voiced his support for greater enforcement, he stopped short of calling for a two-way protected bike lane on Central Park West, and spent much of the segment discussing the need for a new law requiring physicians to notify the DMV of medical incidents that could cause a driver to lose control. Such legislation is the domain of state lawmakers, while a two-way bike lane—as safe streets advocates and some local politicians have pointed out—is something the mayor could push for right way.

Eric Phillips, a spokesperson for the mayor, said the DOT is conducting a full analysis of the area, which the mayor would use to inform his thinking on a two-way protected bike lane.

Madison Jane Lyden's death is a profound tragedy, even more so because it was preventable. In many areas of our city, painted bike lanes are simply not enough to protect cyclists. We need a two-way protected bike lane on Central Park West. This should never happen again.@TransAlt

Hi, Mayor de Blasio. Where is your plan for a protected bike lane for Central Park West and around all city parks? You should have an announcement ready to go this week. https://t.co/XRtGg4EUdk

The mayor also has not yet addressed his previous statements that not all drivers who block bike lanes should be considered an enforcement priority. He most recently endorsed the practice during an appearance on WNYC earlier this year, telling Brian Lehrer, "If someone’s blocking...a bike lane for 30 seconds while they take out the groceries or to let their kid off, I don’t think they should get a ticket for that."

"If someone leaves their car for any meaningful amount of time," he added, "they should be penalized and that should be an enforcement priority."

Asked whether the mayor's position on blocking bike lanes had changed, Phillips told Gothamist, "The Mayor doesn’t want people parking in bike lanes. He wants consistent, common sense enforcement of that law." Repeated follow-up questions about the mayor's threshold for a "meaningful" amount of time, or whether the mayor regretted his previous position in support of blocking bike lanes, were not answered. "Nothing has changed in his view," the spokesperson replied.

On Tuesday morning, we received a photo of two officers who'd left their cruiser in the unprotected bike lane on Houston Street, and "casually" walked away. We asked the spokesperson whether de Blasio is concerned about cops blocking bike lanes in non-emergency situations, and whether this should be considered an enforcement priority—we'll update if we hear back. 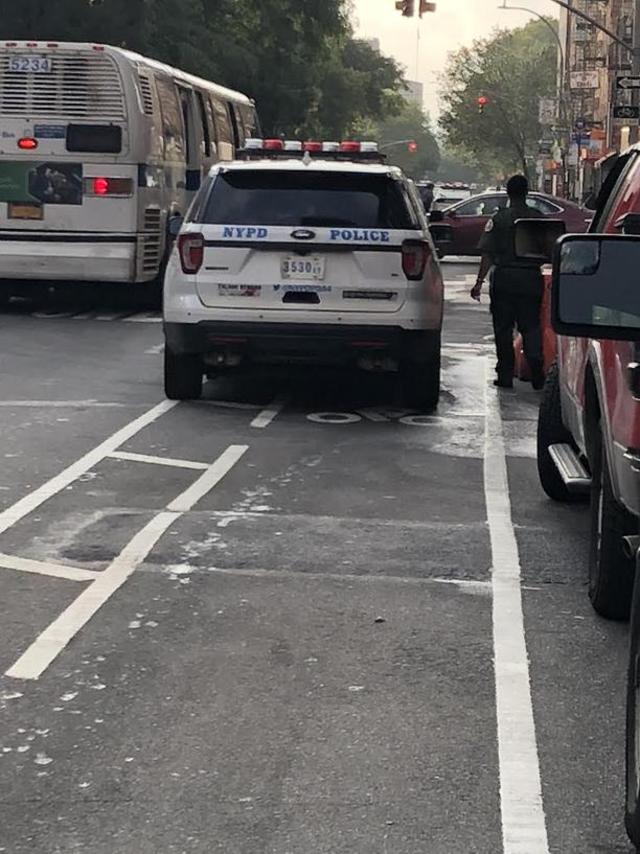 "Absolutely insane that this happens so frequently," our tipster wrote.